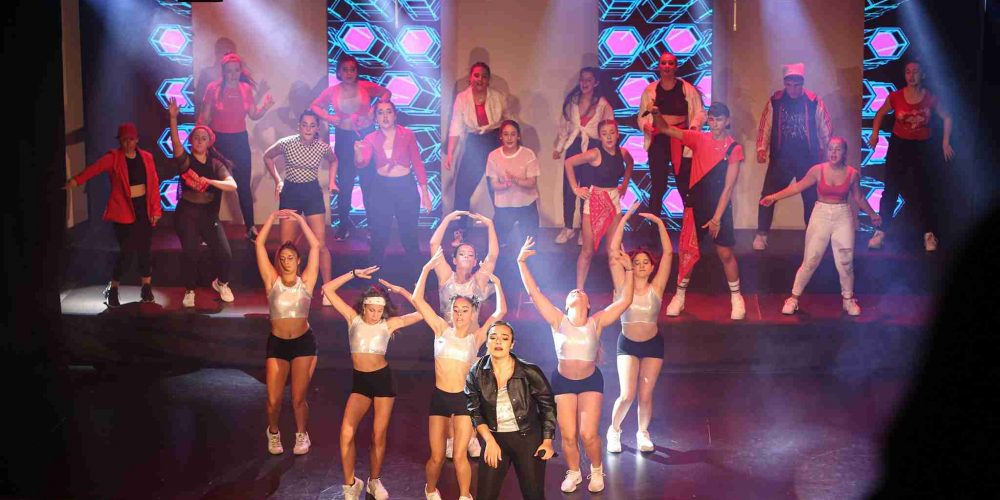 They deliver, they’re amazing, getting better and better, incredible harmonies, professional performance and the list can go on and on…on the night, most definitely it was once again, all of the above!!

Seems like summer has finally arrived: It certainly was a hot sticky night but thankfully the temperature in the John Mackintosh Theatre was just right for most of us on this Friday night, it’s the 11th of June so the warmer weather has began…

He’s going to be a busy boy as – at the time of writing – he’s just been sworn in to become Mayor of Gibraltar for a couple of years or more. Christian Santos, GAMPA ‘Top Body’ or Director of the hardworking outfit he fronts! On the night, he announced at the start with closed curtains, it had been 18 months or so of GAMPA close down because of the Lockdown (the COVID one that is) and the desire to get back to work on stage was evident in the exhilaration of all the performers’ presentations. Continuity was pretty much seamless and the 90s hits just kept on coming. I thought the first couple of songs chosen weren’t as popular as they could have been. I didn’t recognise them but then, that was just me…The fact of the matter is that it didn’t deter from the performances as the group danced, bounced and jumped accompanied by some interesting moves in sync all over the stage, with appropriate, digital backdrop images and lighting provided by lighting guru, Jordan Lopez! The choreography was different, unusual and eye-catching. It really was a rousing intro appreciated by family members and friends in a full house JMH Theatre…Then came the hits, hit after hit pounding out of the theatre speakers like mad and the energy on stage was electrifying.

From then on all the songs were memorable hit songs from teeny pop tunes to more serious classics not least through performances from veteran guests Giles Ramirez with the rock ballad ‘I Don’t Want To Miss A Thing’ by a couple of GAMPA’s improving solo singers and later Lady Andrea (aka Andrea Simpson) giving us an incredible rendition of Celine’s, ‘My Heart Will Go On.’ Show Dance Company assisted through the night adding to the slick presentations and it must be pointed out it’s customary to use backing tracks when groups or ensembles are jumping and moving around on stage. It would be very difficult to balance all the harmonies just right plus the fact they may be out of breath but…it is those on stage who have recorded the pieces you’re listening to not recordings by others! However, having said that there were some great ‘live’ interpretations of songs by the lead singers and by groups: yes, live and in harmony during a Spice Girls medley and an interpretation of ‘What’s It Gonna Be’ by another four girl group. Mostly girls on stage but the boys were there too doing a fine job with their songs…We also had, ‘Rhythm is the Dancer,’ (certainly was, on the night) ‘Hero,’ ‘Believe,’ ‘Vogue’ and others coming across loud, clear and with gusto!

It’s always difficult to highlight a performance by any particular group or singer in case of leaving one out but lots of credit must go to Ella Vinet as she tackled Whitney’s ‘I Will Always Love You’ …a lot to take on board and she did marvellously well to continued audience support clapping, ooh-ing and ah-ing at all of the classic’s high points.

The show’s duration – with no interval – ran for about 90 minutes – just right, with all those exhilarating performances. What better to bring a perfect ending to a great 90s night with many of the cast coming off stage mingling with the appreciative audience and encouraging those present to join in and ‘Pump Up the Jam’ and ‘Boom, Boom, Boom’ the night away…and what a night it was!

It has to be pointed out performances of this calibre don’t just happen – as was the Drama Festival Performance by GAMPA a few weeks ago – These presentations involve rehearsing, rehearsing and rehearsing over and over again to the point of all concerned becoming very tired and perhaps even bored!! But they need to go on, and on and on and then, the fruits of hard work show up positively on the night to the point of making it look easy. I think I’ve said this or similar before, but it can’t be pointed out enough to make us begin to realise the amount of work put in…It’s not by magic!

As mentioned the main man will be busier now with his Civic Duties and that’s why he now has a great team at GAMPA – tutors and other important helpers there to keep up the good work.

…It shows, and this was once again…ANOTHER GAMPA WINNER!