A Muddle of Guns 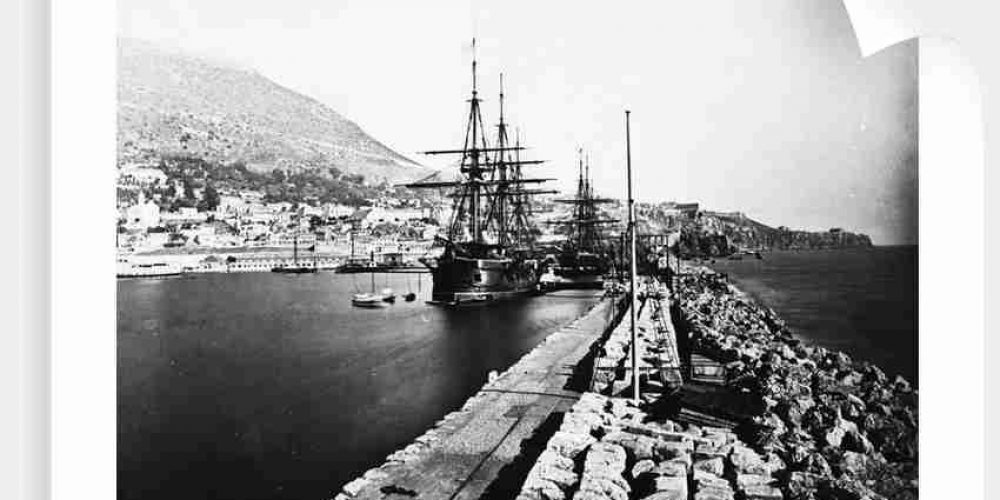 The ability of the Ministry of Defence in Britain to maintain the impregnability of Gibraltar was fiercely debated in Parliament in the 1870’s.

It was generally accepted that although Gibraltar was in a “thorough state of defence so far as a land attack was concerned…it was impossible to argue that Gibraltar could repel an attack from the sea”.

The rapid changes in and improvement of defensive and offensive artillery “rendered it necessary that they should consider the subject of re-arming the fortress of Gibraltar.”

During the early days of William Gladstone’s first term of office as Prime Minister the debate continued as to whether the development of the new range of heavy battleships, the ironclads, with fire-power with enormous long-range, for those days, of three miles left Gibraltar vulnerable.

The launching of the steam-powered ship of the line “Napoléon” by France in 1850 had begun an arms race between France and Britain that lasted for a decade.

In 1859 France’s launching of the first ocean-going ironclad warship, the wooden-hulled “Gloire”, upset the balance of power by neutralising the British investment in wooden ships of the line.

It started an invasion scare in Britain as the Royal Navy lacked any ships that could counter Gloire and her two sister warships. 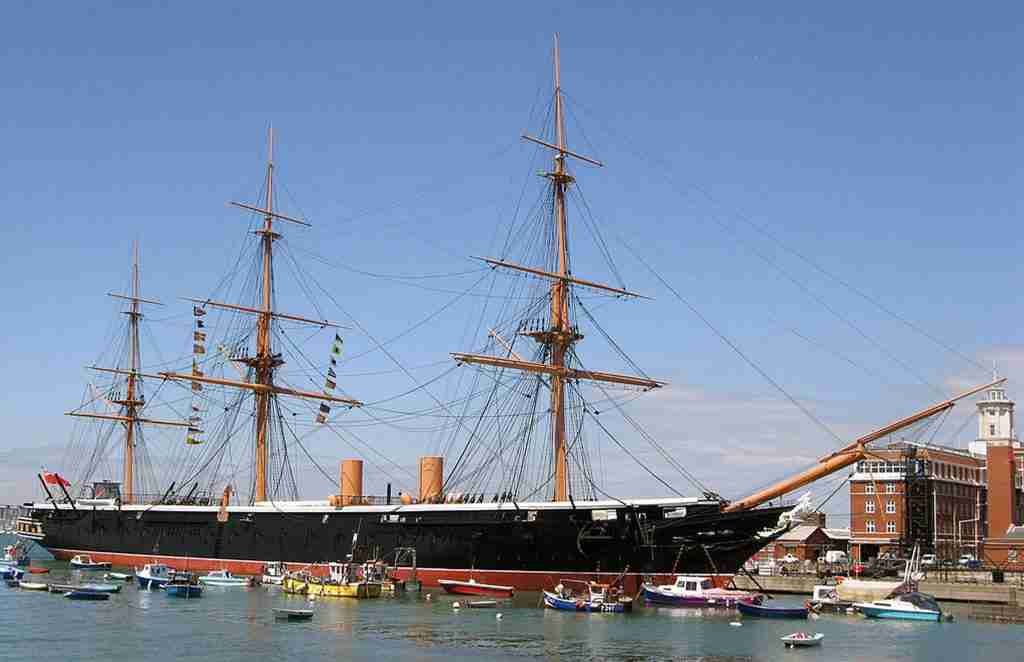 HMS Warrior “the most powerful warship in the world”

The situation was perceived to be so serious that Queen Victoria asked the Admiralty if the “Navy was adequate for the tasks that it would have to perform in wartime.”

HMS Warrior and her sister ship “Black Prince” were built in response to that question. They were “the fastest, largest, strongest and most powerfully-armed warships in the world, and confirmed Britain’s place as the ruler of the waves.”

The Warrior-class design used many well-proven technologies that had been used in ocean-going ships for years, including her iron hull, steam engine and screw propeller; only her wrought-iron armour was a major technological advance.

“What made Warrior truly novel was the way in which these individual aspects were blended together, making her the biggest and most powerful warship in the world.”

Being faster, better armoured and harder to hit than her rivals, she was superior to any existing naval ship. The Admiralty immediately stopped the construction of all wooden ships of the line and ordered another eleven ironclads over the next few years. 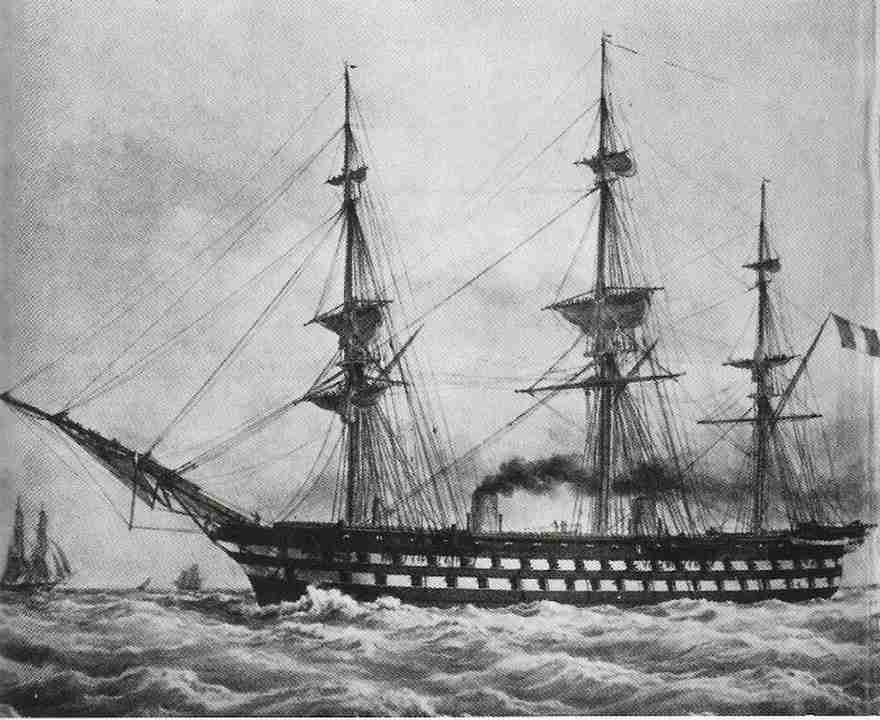 Jacky Fisher, who was Warrior’s gunnery lieutenant in 1863–1864, later wrote that most people did not realise at the time what a significant change it would bring about: the end of wooden ships of the line such as Nelson’s “Victory” – the then “weapon of mass destruction” had been overtaken by a new era.

New types of defence on Gibraltar against ironclads came under review.

The installation of two 100-ton guns, with a long range, of which the one at Napier of Magdala Battery still survives, was one result of the debates – but they were the largest guns ever which still needed to be loaded via the muzzle-end. New developments in breech-loading soon made the 100-ton guns obsolete. 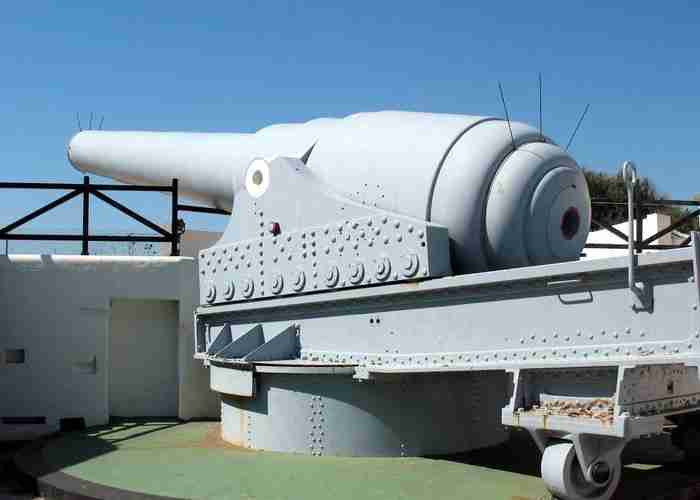 Other inventions and developments, such as the disappearing carriage gun which could give more protection to both gun and crew, were debated.

Different, ever-changing concepts had different degrees of acceptance by the military and the politicians, particularly the development of protection of the batteries by setting the guns in casemates or giving them shields. 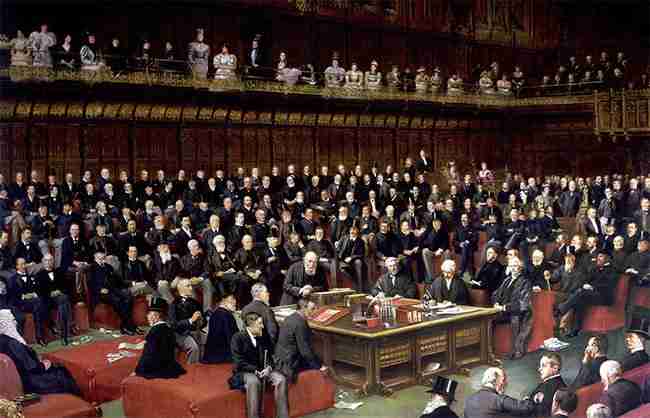 Hansard records an exchange between Members of Parliament in a debate on 28 March 1871, when Mr A Guest rose and stated, in what went on to become a detailed comment on the incompetence of the Secretary of State for War, that he wished..

.. “to draw the attention of the House to matters connected with the armament of Gibraltar”.

He went on to say that, “He did not mean to enter upon the question how Gibraltar should be armed, or the nature of the batteries to be employed.

His object was to draw attention to the wasteful manner in which the public’s money had been expended in constructing the batteries and the delay in the works, and to show that a bad policy had been pursued in mounting the heavy guns, of which there were but few at present in position in a temporary housing instead of a permanent method”.

Mr Guest continued, ”As to the guns themselves, it was evident”, he said, “from the Estimates for 1869-70 that the Secretary of State for War intended at the time to use guns of the 12-ton Woolwich type class in fortifying Gibraltar.” 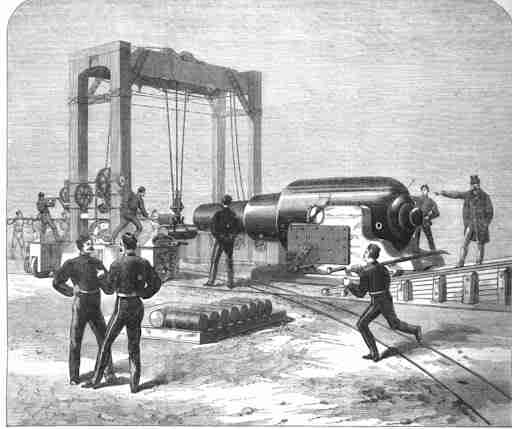 About £15,000 was voted that year for the purpose of making the necessary alterations in the works to provide for them; and it was also decided that sixteen of those guns should be sent to Gibraltar that year.

Of the sixteen 12-ton Woolwich guns he had mentioned, only three had been put in position, and of that number two had, in November last, been placed behind shields which the Committee of 1868 had condemned as utterly incapable of withstanding the continuous fire of heavy modern guns – a fact which was well known when the shields were erected.

But, although these two guns were in position, the magazines for them were not completed; and he trusted the Secretary of State would be able to explain why the course he had described had been pursued.

The third gun, instead of being mounted on permanent works, had from some inexplicable reason, been placed upon a temporary platform, composed of wooden balks to carry the racers, the whole set in a bed of ordinary concrete.

This had not been done as an experiment, for he was informed that eight other guns were to be mounted in the same way”.

It was evident, said Mr Guest, that the guns “could not remain long in that condition, and therefore the money expended on the process, some £30,000, had been entirely thrown away. 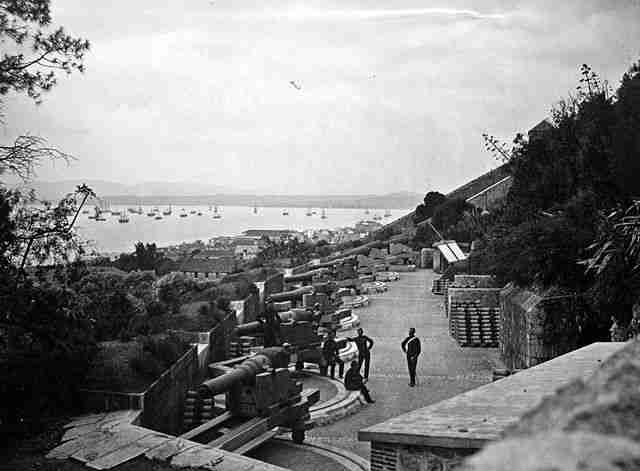 Furthermore, one of these guns had been tried, and after firing ten rounds it was found impossible to traverse it, as the truck was broken and one of the racers had been forced out of its position.

This might be all very well in the time of peace, but if such an accident occurred during an engagement with ironclads, every habitation in the place might be destroyed, even if the fortress remained untaken.

The new Mole batteries were allowed to be of the first importance and of the best construction.

It was true that the battery, originally constructed for these guns, had not yet received its armament, and while the question of iron shields was still unsettled, it was undesirable that the Government should come to any hasty decision; but he should be glad to hear from the Secretary of State what kind of shield would probably be adopted, and when they would be sent out to Gibraltar.

The works had been constructed for one class of carriage, and another of quite a different description had arrived with the guns.

He thought this was evidence of gross negligence, and it must be remembered that when works were abandoned in an incomplete state, they were much damaged by the weather.

He had himself seen several batteries in the condition he had described and he had reason to believe that the magazine accommodation at Gibraltar was not only the laughing-stock of military men, but also of civilians.

There was hardly a single magazine which could not be knocked to pieces during the first hours of a bombardment, and, to make the matter worse, in some instances batteries had been built so close to magazines that the fire of an enemy must fall upon them.

He hoped that the Secretary of State for War would assure them that the question should have his serious attention”.

The Secretary of State for War

The Secretary of State for War, Mr Cardwell, found his way out of the scathing broadside admirably, replying “I would inform the House that it was determined, on the recommendation of the Defence Committee, that 12-ton 9-inch guns should be used in certain positions at Gibraltar. 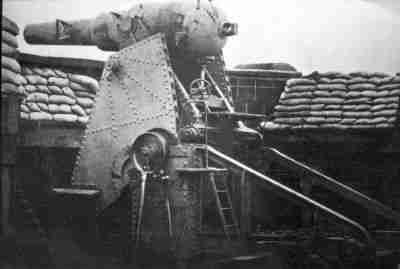 Moncrieff “disappearing” gun carriage – “cumbersome, difficult to maintain and operate, with a slow rate of fire”

“Shortly after that time, however, thicker plating was used for ships, and it became important to have still stronger guns.

Consequently, 10-inch guns were substituted by the Government for the 9-inch or 12-ton guns.

About the same time, also, it happened that the interesting discovery of the Moncrieff gun-carriage was made, and it was not certain how far that system could be applied to Gibraltar, nor how far the system of shields could be applied.

Now, it would have been most unreasonable, in the opinion of the Defence Committee, to hurry on without availing themselves of such inventions as these; and the consequence was, that when these 12-ton guns came to be utilized it was determined to place them in a different position from that for which they had been originally intended.” 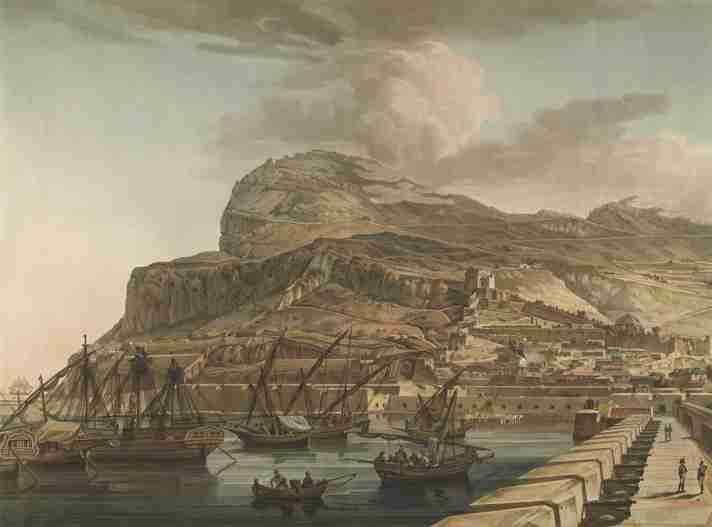 Gibraltar defences 1770, 100 years before the ironclads