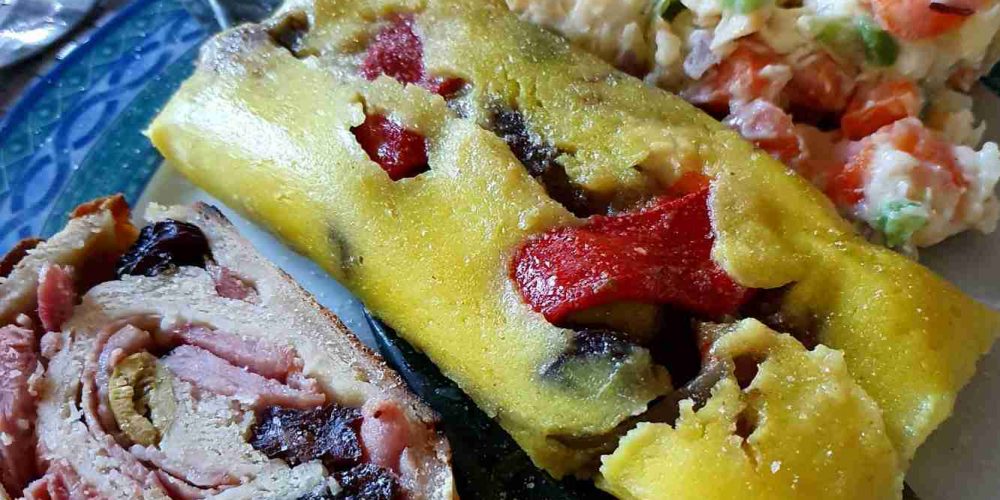 Mark Montovio shares some of his much loved local and world recipes, opening up possibilities for making each dish to suit a variety of families, different tastes and particular dietary needs. Combining his love of different cultures and world cuisine he is also committed to preparing meals which are nutritious, tasty and good to look at, with minimum waste and using seasonal produce.
The hallaca is one of the oldest food traditions in Venezuela and it is the most popular festive meal. Although there have been some modern refinements, it is still prepared in the traditional way (15th Century) and it is one of the most representative icons of Venezuelan multicultural heritage, combining European ingredients (such as raisins, nuts and olives), indigenous ingredients (corn meal coloured with achiote seeds), and African ingredients (smoked plantain leaves used for wrapping).
There are a number of stories about its origins, but I think a popular one is that it was created by the slaves during the colonial times, when they used to put the leftovers of their master’s Christmas festivities in a bit of cornmeal dough, wrap them with banana leaves and boil them. A keen no waster and lover of traditional cuisine this idea appeals to me.
Some say the word hallaca comes from the word ayacá, of the indigenous group Tupí-Guaraní, which means lump, and others that it is a combination of the word ‘allá’, from the stew prepared with ingredients that came from abroad, and the word ‘acá’, from the corn dough and the banana leaf found in Venezuela.
The stew, el guiso, is probably the star of the dish and that needs to be flavourful. A variety of meats are used and cooked slowly until the meat is tender, together with onions, leeks, peppers and red wine. It needs to be thick, and you may do that by adding some cornflour mixed in the broth.
In another pan you need to boil a chicken, as you will use its meat, but more importantly the stock to make the dough. The dough is made with this broth and precooked cornflour. PAN is a popular variety, with a dash of achiote oil, the equivalent of saffron, for flavour and colour. The mixture should be spreadable with a spoon.
Once all the parts are ready the hallaca is ready to be assembled. You place a banana leaf (30x30cm) vein side facing down onto a flat surface and wipe it with achiote flavoured oil, then spread the dough in the middle. Once that is done you would add the guiso filling, top it with shredded boiled chicken, a ring of onion, a strip of red pepper, two green olives, and a few raisins. You close the hallacas folding them over carefully so as not to break the leaf and then use another two sheets to make sure it’s all kept together. The final sheet is usually referred to as ‘la faja’. These then need to be tied with cooking twine, and there is an ancestral art to that, but using common sense will do!
The hallacas are ready to be cooked in salted water for about 40 minutes and ready to eat once cooled, although they taste better once they have cooled down and settled in the fridge for at least one day, also freezing really well. Hallacas are served with pan de jamon, pernil (roast pork) and ensalada de gallina which is similar to Russian salad. However, there is nothing I love best than to rummage through my freezer and come across the lovely packages waiting to be eaten on their own, or with a bit of mayonnaise, which is a bone of contention in Venezuela!
Although they require hours of work, they are usually made by the whole family.
This amazing dish represents a gesture of friendship among people, because the hallaca is also shared with others outside the family, and you can consider yourself privileged, if someone has wanted to share them with you.
Text And Photography By Mark Montovio