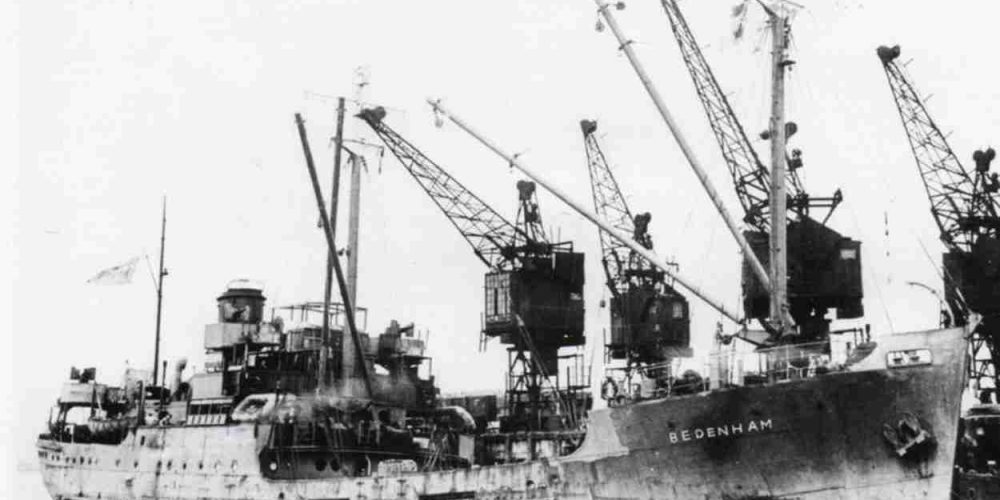 Last month marked the 70th Anniversary of the explosion of the Royal Fleet Auxiliary Bedenham, which arrived in Gibraltar on the 24th of April 1951 with approximately 790 tons of depth charges, ammunitions and other artillery destined for Gibraltar and Malta.

When berthed at No.39 berth, Ordnance Wharf, the cargo was unloaded onto the Wharf and onto No.10 lighter vessel that was moored on the RFA Bedenham Port side.

Loading of other ammunition into RFA Bedenham No.2 hold destined for Malta was also simultaneously carried out. On the morning of the 27th of April at approximately 09:54, an explosion occurred on board lighter No.10 while a hoist of depth charges was being transferred.

A depth charge ignited while in the process of being unloaded. This caused a fire and the explosion in the lighter, which then spread to the Bedenham itself. Brave attempts to contain the fire proved to no avail and the Bedenham too exploded violently.

The explosion rocked Gibraltar. Its force was such that parts of the vessel were blown out of the water onto the quayside and elsewhere.
It was tragic event that resulted in the death of thirteen people and caused a lot of damage around town. It was a watershed moment in our history, and one that affected a lot of people. Everyone can remember what they were doing that day. It happened a few years before I was born, but I heard the story as a very young boy, because it had a direct impact on our family. One of the thirteen persons killed was my uncle Jose Moss. I asked my cousin Cecilia, who was four years old, what she remembers of the day she lost her father.

“I was only four years old, and we lived in a house in Main Street, sharing with our grandmother and our uncles. All I remember is the news that there was a fire in the dockyard and that workers were being asked to take cover. So, my mother left to find out what was happening, and placed me in my cot under the care of our grandmother. Suddenly there was this bang and shattered the glass from a window scattering it around my cot. I remember seeing pieces of glass everywhere.”

My grandmother lived in a house with her five sons, four of which were married, except my father. They each had their own bedroom and shared common areas like a large kitchen. From my grandmother’s point of view, the worry was that she had all five sons working in the Dockyard at the time. My own father Mario was employed as a boy labourer, but he was at a medical appointment having a minor eye procedure. My other uncle Anselmo, who was in the Dockyard Fire Brigade, was at home on a day off-duty, so she did not have to worry about him either. My uncle Luis was working as an upholsterer and my Uncle Jose, the eldest brother, who was in the stores. The only worry was my uncle Manolo, who was in the ammunitions store.

“So… my mother,” continued Cecilia “went to the Dockyard to find out about Uncle Manolo. The last thing on her mind was worrying about my father.”
No harm came to Manolo and Luis. Tragically, my uncle Jose died instantly as one of the huge doors in the building fell on him. “The door fell to the side, also killing another worker who was passing by,” she explained.

One will never know what happened, but Jose was moving out for cover with another worker, and for some unknown reason he decided he had to return to the stores for something. His companion urged him to come back. He survived but my uncle did not. It was an unfortunate instance of being in the wrong place at the wrong time. The story becomes even sadder when my cousin said that my aunt Ana, who was looking for her brother-in-law, sees a truck pull up with people who were injured or possibly deceased. That is when she saw a body and recognised her husband by the shoes and socks. She was told the truck was taking them to hospital, so she made her way to the civilian St Bernard’s. Nobody knew anything about it at St Bernard’s, and she was told they had most likely taken them to the Military Hospital.

Flying debris also killed two traders on Ragged Staff Road. It has been speculated that Gibraltar’s defensive structures and city walls actually helped to deflect some of the force of the blast away from the town area. The event affected a lot of people, through injuries, the trauma of being a witness to the explosion and the damage it caused around town. I asked my cousin how it had affected her life.

“We did get a small compensation from the British Government, but it was hard growing up without a father who was the breadwinner. Times were hard generally, and we lived as five families under one roof, under our grandmother. So, our family unit of my mother and I suffered the most, emotionally and financially. As a young girl I remember sometimes being hungry.”

It was only when she was old enough to work, and then her mother could work too, that things improved for them. In the meantime, they were surviving on the small payout they had received. Her father’s body was buried with the other victims at a memorial in North Front Cemetery, until a year later her mother was able to transfer the body of her father to the family vault. The British Government offered all the families of the victims to ask for any help they required. Unfortunately, our own Civil authorities did not help much, primarily because they did not have the power and responsibility they have today.
Indeed, it was until the 50th anniversary that the “authorities” were made aware that there was still a surviving widow and daughter.

It is good that our local Governments now are more involved in preserving our culture and our history. If we are to be a ‘nation’ these stories from our past must not be allowed to be forgotten. So, on the 27th April this year, the Deputy Chief Minister Dr Joseph Garcia, and His Worship the Mayor, and the heads of the Airport and Gibraltar Fire Brigade laid wreaths at the memorial in Gun Wharf.

I wonder many times, like my cousin Cecilia thinks. What if he had not turned back? What was so important that he risked his own safety to go back to the stores? Was the warning to evacuate and take cover from a potential huge explosion made clear? One second later and the doors might have missed him. We are now so used to health and safety regulations at work that we forget how different things were. What is clear is that on that fateful morning of the 27th April in 1951 life changed for my aunt Ana and my cousin Cecilia.