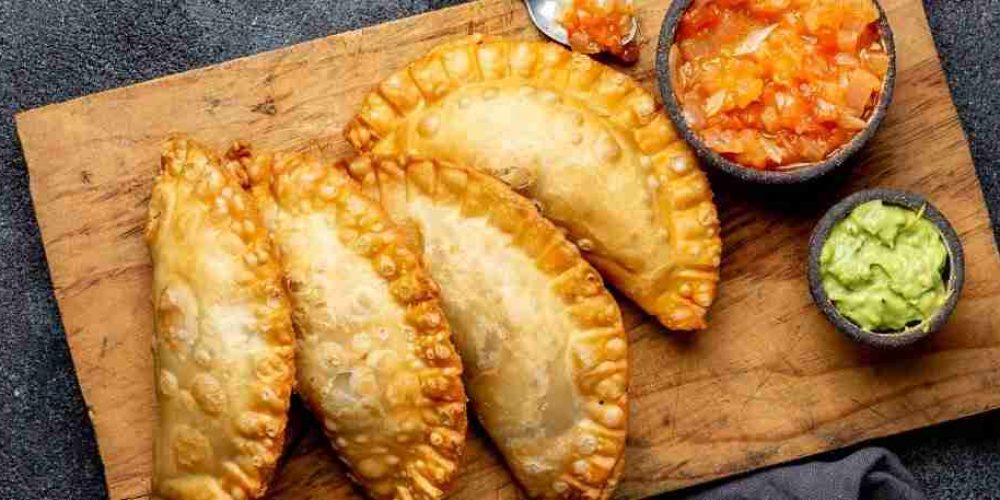 Empanada is the Spanish term for pasties. It is probably correct to say that every language and every country has a word for empanada with its own particular recipes.

When it comes to its filling, sweet or savoury, it is very varied, and in general, it is made with a fine dough of corn, wheat, or puff pastry, folded in the shape of a half-moon, and then baked or fried. From Jiaozi in China, Gyoza in Japan, Paczki in Poland, to Panzerotti in Italy, the empanada is popular as a snack or as part of a main meal.

An early reference to empanadas was found in Persia dating back to 100 BC. Another empanada milestone was the landing of the Moors in Gibraltar where both Spain and Portugal made it their own. The Spanish loved it, and named it, (empanar: to wrap in bread) and then spread their recipe worldwide as they conquered the West.

When the Spanish invaded America in the 16th century they shared the recipe with the Aztecs and Maya and they made the empanadas with corn dough.

It is the recipe for Venezuelan empanadas that I want to share with you today, and a particular bonus is that these are gluten free. It is a dough-based on pre-cooked corn flour. These are a great tradition and come in an extraordinary variety.

In Venezuela they can be bought all year round in coffee shops, restaurants, for breakfast, lunch, afternoon tea, and even dinner.

When these are filled with minced meat, they are called Empanadas de carne molida, and when they are made with pulled/shredded meat, Empanadas con carne mechada.

The filling is similar to that which we might use to make meat lasagne, although in Venezuela they commonly add soy and Worcestershire sauce.

Whether this is made with minced or shredded beef, adding vegetables of your choice and often leaving it to rest overnight, makes this filling a winner.

The pastry is the same as the one you would use to make arepas.

You need two cups of pre-cooked corn flour, PAN is the brand available locally, 1 cup of lukewarm water, a teaspoon of sugar and turmeric, and a pinch of salt.

You mix all that in a bowl and let that rest. I like to add a few spoonfuls of milk to the dough and I hear that some people add a sprinkle of dry grated cheese.

You let it rest for a bit, sprinkle flour on a work surface and roll out the dough.

Using a glass, size of your choice, you cut out circles, and adding a spoonful or two of the filling depending on the size, you fold the pastry using some water or milk to seal, and pinch the edges.

For those of you who are calorie conscious they can be oven cooked but, and this is a big but, there is nothing like a deep fried empanada, in plenty of olive oil, and eaten just after it has rested on kitchen paper for a few minutes.

No Venezuelan feast or gathering would be without empanadas, and no doubt, once you start making these, they will form part of your culinary repertoire!