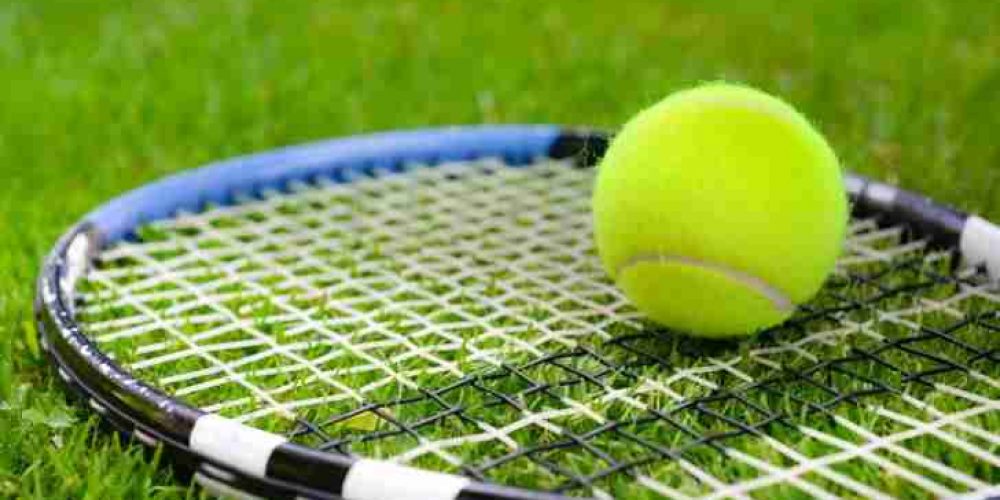 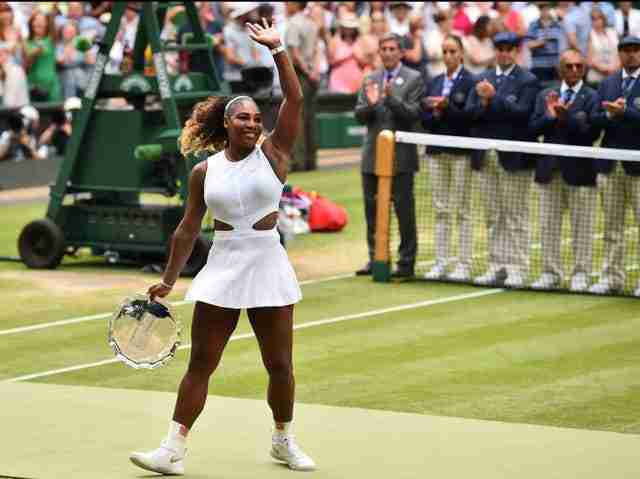 Unique among sports, tennis is truly a workout for the entire body..watch the tennis champions at work in the top tournaments and it’s clear that they are and need to be super-fit athletes.

Tennis is considered to have originated in the monastic cloisters in northern France in the 12th century, a game in which the ball was struck with the palm of the hand.

Now, with well-developed technique and latest in ball and racket technology the world’s fastest tennis serve, back in 2012, has reached a speed of 263.4 kph 163.7 mph. 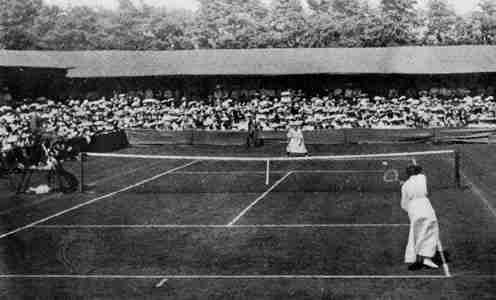 Ladies’ singles at Wimbledon in the early days of Lawn Tennis

A tennis game gives legs, shoulders, arms, hands, upper back, and lower back a good workout combined with a strengthening of the core muscles. 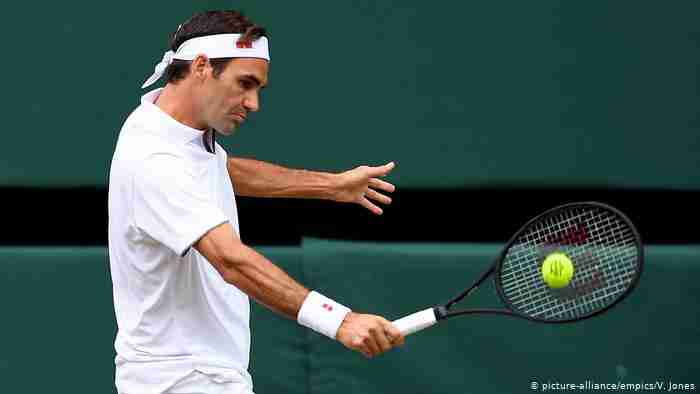 HIIT is more effective for burning fat and losing weight than sustained cardio like running which requires a continuous, steady, moderate effort sustained for an extended period of time.

Studies show that “playing tennis can improve critical thinking, mental alertness, and tactical thinking by making connections in the brain”.

Whether a regular player or one who hasn’t yet experienced tennis, it’s straightforward to get a tennis game in the public facilities provided in many communities.

In Gibraltar, it’s open to all who have  their equipment at the ready to go along to the public courts at Bayside Sports Complex to get a game.

The Tennis competition for the Gibraltar 2019 NatWest International Island Games was played at both the Bayside Sports Complex and at the Gibraltar Sandpits Lawn Tennis Club. 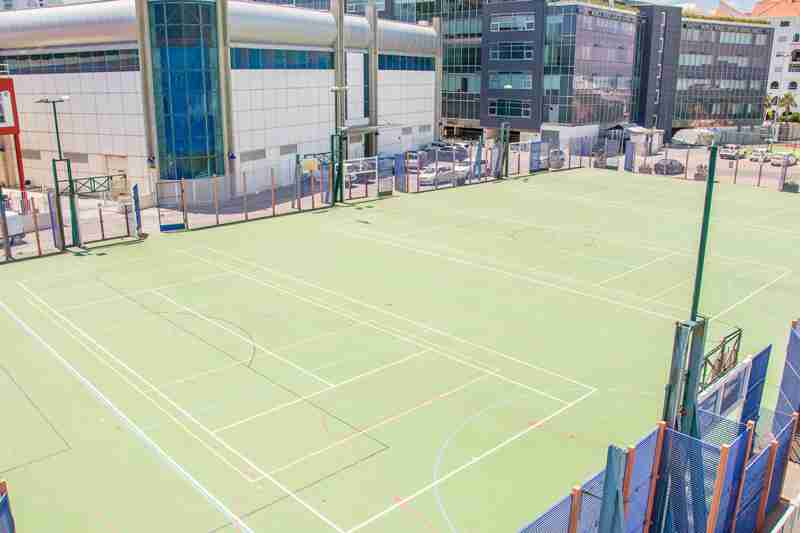 Available by booking at the counter, or by phone ahead the Complex offers a choice of both tennis and padel-tennis (three courts).

All courts at the Complex are in good condition, with the padel courts resurfaced in 2017 and with a brand new Plexipave tennis court surface laid down in 2019 for the Island Games.

There is a less strenuous side to tennis – socialise while watching other people play!

The three tennis courts have been recently resurfaced with Plexipave and, together with the two paddle-tennis/padel courts, are overlooked from the Terrace

The Club House provides showers and toilets for both males and females and also a physiotherapy room, with Ladies’ fitness evenings held at the gym. The gym is open 24 hours a day, with rigorous hygiene controls maintained, and with martial arts training using the hall at the Club House as a dojo at set times. 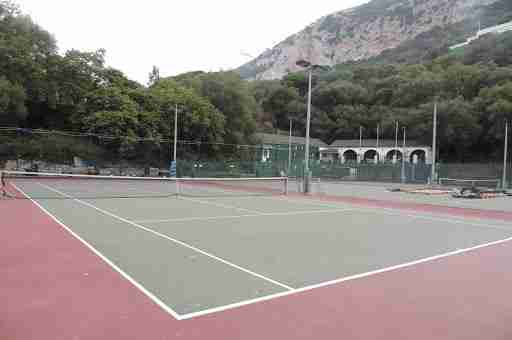 Located in an idyllic setting with its own microclimate next to the six hectares of the Gibraltar Botanic Gardens, aka La Alameda Gardens, now with the Alameda Wildlife Conservation Park, the consistent weather provides almost perfect playing conditions.

Accompanied by chirping of crickets at times combined with clucking of a nearby hen or two and a cockerel occasionally crowing, and with botanic fragrances drifting on the air the mind is set at ease, whether relaxing on the Club House terrace or preparing for a game.

Since its formation in 1882 the Club has been through many re-creations including the Club House being rebuilt with participation by the Gibraltar Government  after being demolished  by a landslip one wet, dark night in the 1960’s. The Club formally became Gibraltar Sandpits Lawn Tennis Club in 1948/1949.

Members play each other and can take part in the several annual tournaments – members looking to improve their game have access to the four Club coaches. 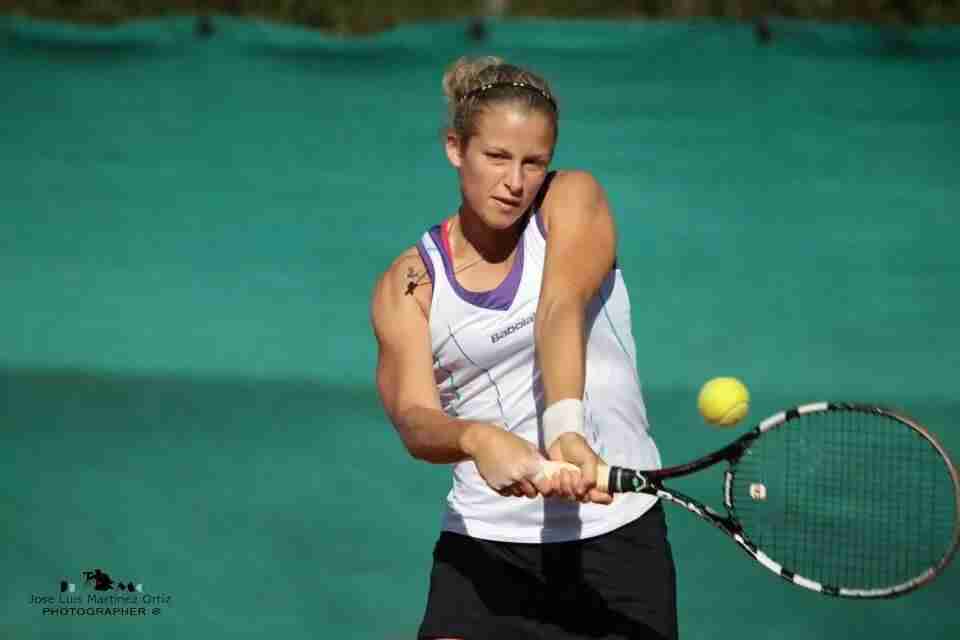 Gibraltar-born Amanda Carreras, ranked in the top 300 of the  ITF Women’s Circuit

They may often find themselves watching a game being played by Gibraltar-born Amanda Carreras, ranked in the top 300 of the  ITF Women’s Circuit, when on a visit to the Club.

Watching a tournament from an easy chair on the Terrace could be a good time to enjoy the restaurant bar,  managed by Alina and Mario, offering quality homemade food.

The food includes a range of montaditos, each named after a tennis Great. The  Federer (serrano ham/ Manchego cheese/mayo), the  mini-casserole Agassi (pork-loin in brandy sauce) and many more, can be enjoyed with a  great atmosphere from mid-morning till late.

Perhaps no better place to chat with the Club’s coaches than when seated on the Terrace, watching a game in progress and perhaps juniors going through their training routine.

Tennis is a mental game needing an ability to focus and visualise success.

Coach and committee member Karl Grambow reflects when coaching, that having that ability  is a requirement in all sports and indeed in life itself as he likes to mention to his players.

He explains that he still finds playing a game of tennis as satisfying as when he was a youngster first listening to the evocative sound of the thwack of the ball hitting the sweet spot on the racket.

His tennis philosophy is that while a top-of-the-range racket can help to hit the ball hard and accurately it is by having a good technique and relaxed grip while putting your body into the shot that ensures the shot works best.

Even now, he says, with the many continual design and material changes of rackets and tennis balls it is still getting the technique right that will ensure the player gets a shot right. 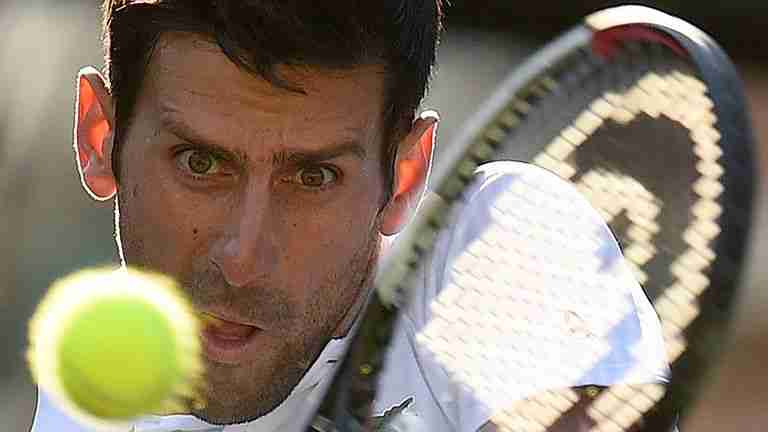 Tennis players and champions Rafael Nadal like working to improve their game and keep fit, while enjoying the process.

Nadal is known to have moved away from heavy cardio and weight training and now focuses on high-intensity workouts that emphasize agility and speed.

His exercises are focused to strengthen the stabilizing muscles around his knees and shoulders and he scaled back his on-court training. The daily routine is a still-daunting 2 to 2½ hours almost daily.

Roger Federer’s training routine varies from weight work to footwork to sprints, working out about 10 hours a week off the court in the off-season.

One aspect of ensuring that the body’s musculoskeletal health recovers fully after enjoying a tough session on court is to sleep.

“Roger Federer, and other athletes like Usain Bolt and LeBron James,regularly get twelve hours of sleep a day, ten hours at night and two hours during the day.”