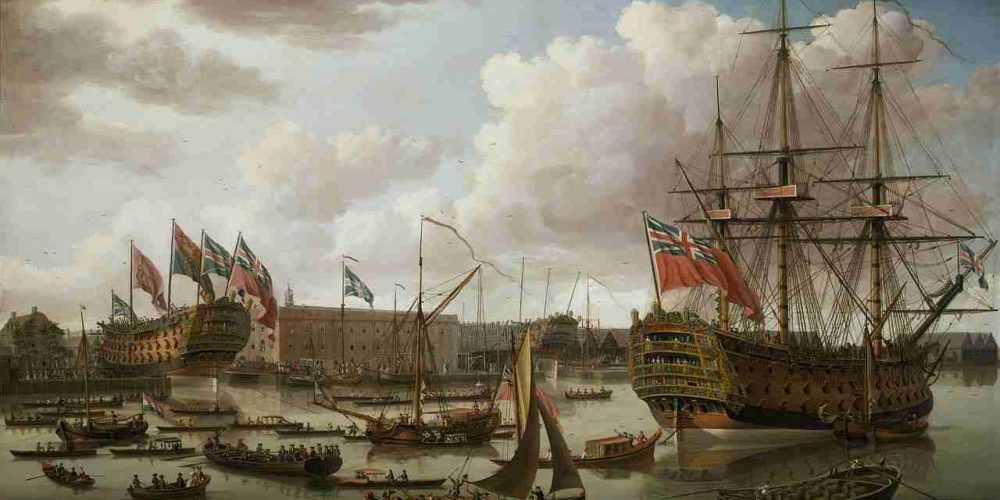 HMS Royal George, a Royal Navy ship of the line and the largest warship in the world, was launched on 18 February 1756.

She was the Royal Anne when construction started but she was renamed in honour of George II as the reigning monarch at her launch.

With 100 guns in batteries on three decks she was classified as first-rate, the designation for the largest ships of the line, with ten years needed to construct her at Woolwich Dockyard.

The first warship to exceed 2,000 tons she was “the eighteenth-century equivalent of a weapon of mass destruction”.

Victory, now preserved as a museum ship in a dry dock at Portsmouth, is the world’s oldest naval ship still in commission, with 243 years’ service as of 2021.

Royal George had a very different ending. 26 years after her launch, on 29 August 1782, she sank whilst anchored at Spithead off Portsmouth

More than 900 lives were lost, making it one of the most deadly maritime disasters in British territorial waters. 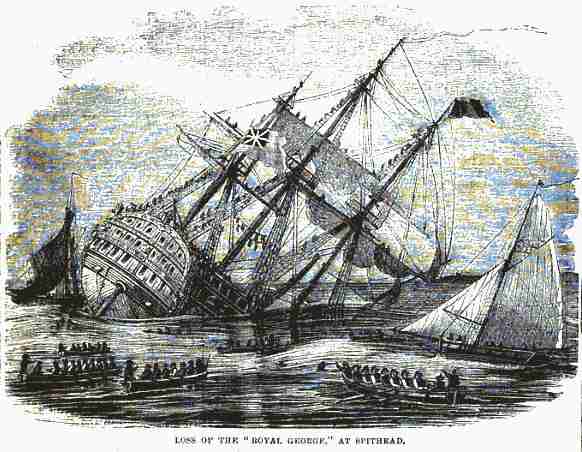 During the actions in the two wars she fought in, the Seven Years War 1756-1763 and the American War of Independence 1775-1783, she was often seen in Gibraltar.

“Under Captain John Bourmaster in December 1779  she joined Admiral Sir George Rodney’s fleet in their mission to relieve Gibraltar.

Under Bourmaster, Royal George took part in the attack on the Caracas convoy on 8 January 1780, the Battle of Cape St. Vincent on 16 January, and took part in the successful relief of Gibraltar three days later”. 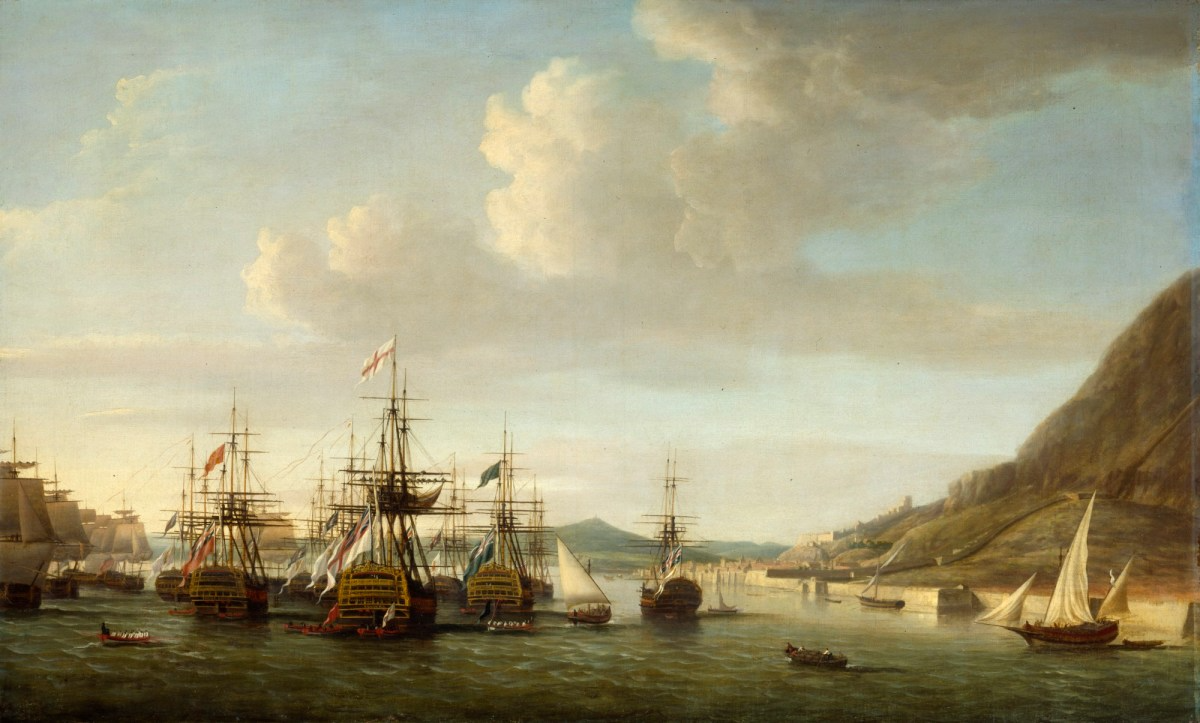 With the rest of the fleet she returned to Britain to have her hull coppered in April 1780 and  then served with the Channel Fleet under Captain Henry Cromwell and Rear-Admiral Richard Kempenfelt.

She served as part of Samuel Barrington’s squadron from April 1782, with Cromwell replaced by Captain Martin Waghorn in May and joined the fleet under Admiral Richard Howe. 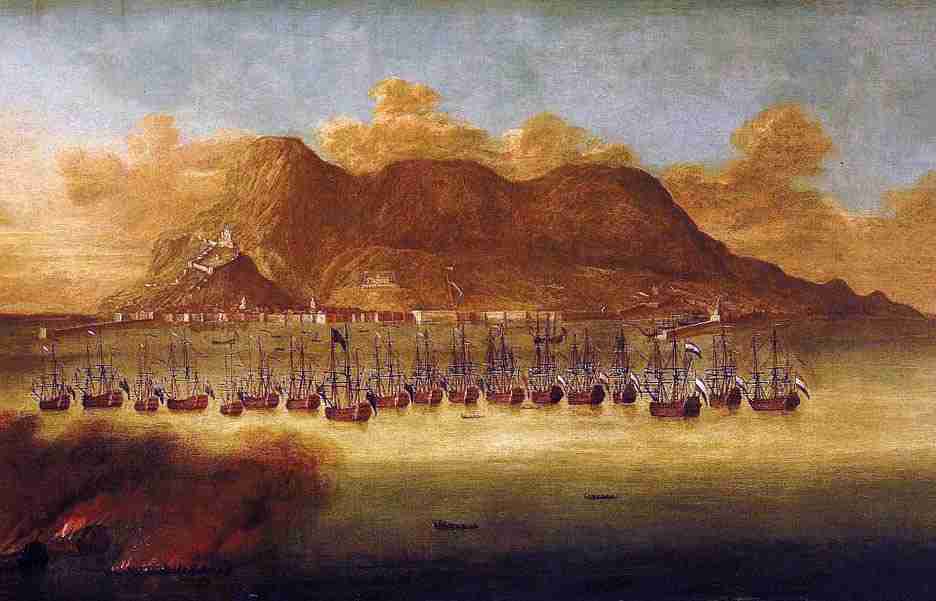 On 28 August 1782 Royal George was preparing to sail with Admiral Howe’s fleet on another relief of Gibraltar. The ships were anchored at Spithead to take on supplies with a large number of workmen onboard Royal George to speed the repairs.

For fear of desertion all shore-leave had been cancelled and every crew member assigned to the vessel was aboard except for a detachment of sixty marines sent ashore that morning. The exact number of the total crew on board is unknown, but is estimated to have been around 1,200.

“There were also an estimated 200-300 relatives visiting the officers and men, 100–200 “ladies from the Point [at Portsmouth], who, though seeking neither husbands or fathers, yet visit our newly arrived ships of war”, and a number of merchants and traders come to sell their wares to the seamen”

At seven o’clock on the morning of 29 August, while lying off on anchorage at Spithead, work on the hull was being carried out on some minor repairs to a deck pump intake.

With no time for dry dock Captain Waghorn had ordered for her to be initially heeled over to a 7 degree angle in order to get to the intake of the deck pump which was 3 feet below the water line.

This caused the ship to tilt over in the water to port but she became heeled over too far, passing her centre of gravity. 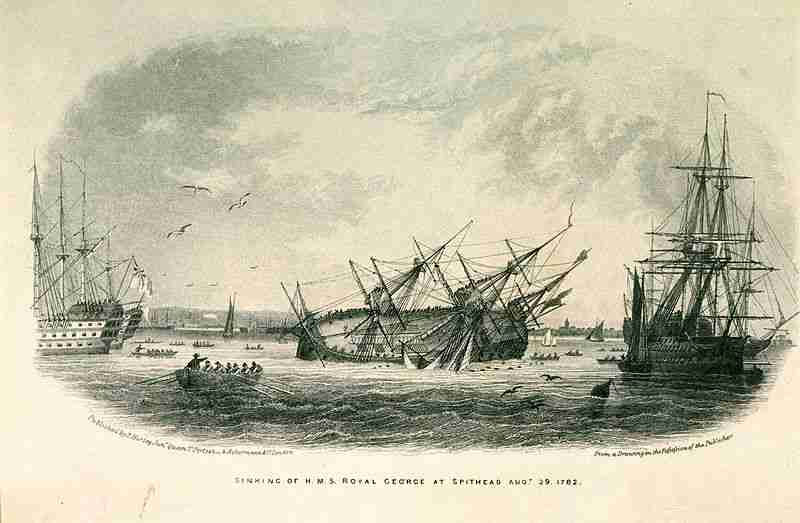 A large number of casks of rum loaded on the now-low port side created additional and, it turned out, unstable weight.

Disaster then struck slowly but very effectively as when the supply vessel the Lark came alongside to transfer some further cargo, the weight of the men and cargo forced the ship to heel further over and water began to run in through the now semi submerged lower gun ports.

Slowly at first, but then faster and faster she began to take water into the hold, even then they had time to correct as the ship’s carpenter had seen the problem.

Realising that the ship was settling in the water, the carpenter informed the lieutenant of the watch, Monin Hollingbery, and asked him to beat the drum to signal to the men to right the ship. The officer refused, dismissing the request out of hand.

As the situation worsened, the carpenter implored the officer a second time. A second time he was refused.

The carpenter then took his concern directly to the ship’s captain, who agreed with him and gave the order to move the guns back into position.

By this time, however, the ship had already taken on too much water through its port-side gun ports, and the drum was never sounded. 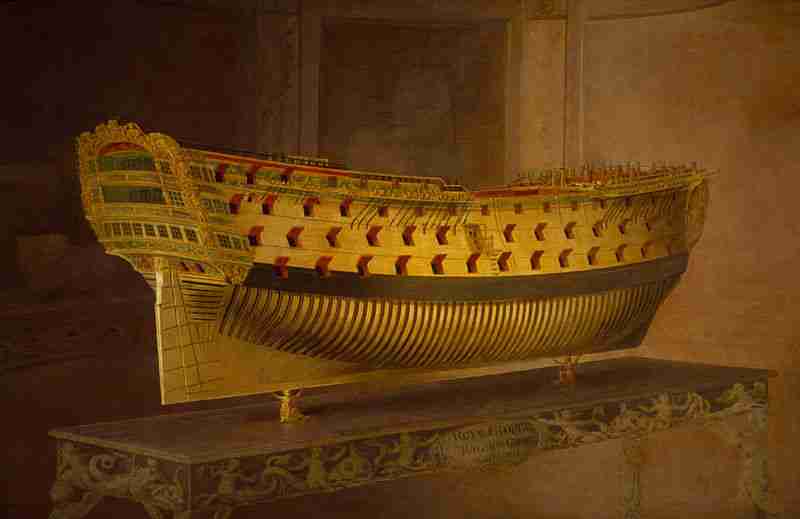 The ship tilted heavily to port, causing a sudden inrush of water and a burst of air out the starboard side.

Royal George filled with water and sank, taking 900 people with her

The barge along the port side which had been unloading the rum was caught in the masts as the ship turned, briefly delaying the sinking, but losing most of her crew.

Royal George quickly filled with water and sank, taking with her around 900 people, including up to 300 women and 60 children who were visiting the ship in harbour.

255 people were saved, some escaping by running up the rigging, while others were picked up by boats from other vessels.

Only eleven women and one child were saved. All of the children but that one lost their lives; a single little boy surviving by clinging on to a sheep which had been on-board. 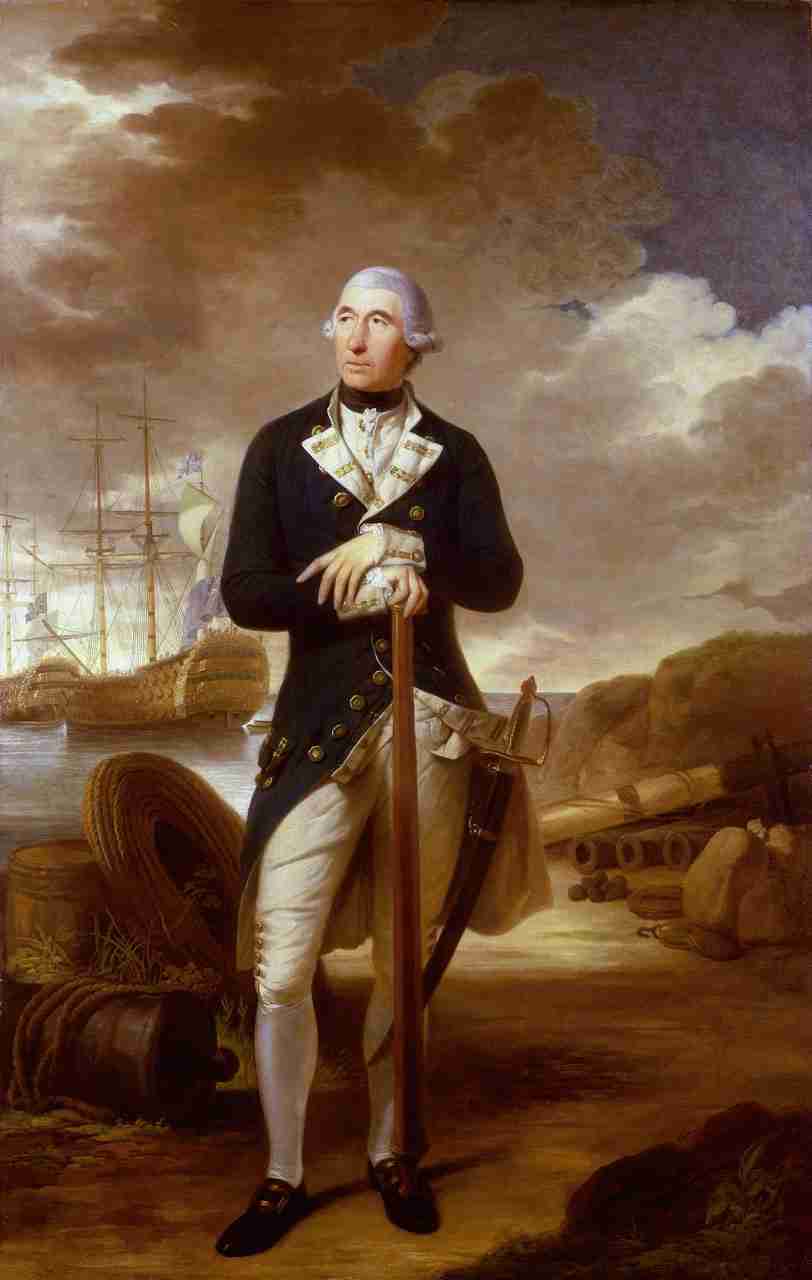 “Admiral Kempenfelt was writing in his cabin when the ship sank; the cabin doors had jammed because of the ship’s heeling and he perished.

Captain Waghorn was injured and thrown into the water. “He could not swim but was saved by one of his own men who helped him cling on to the mizzen topsail yardarm until rescued”.

The carpenter survived the sinking but died less than a day later never having regained consciousness.

Captain Waghorn’s son William, a midshipman, was lost. “He had set off for the shore in a boat shortly before the disaster but had then come back aboard the Royal George to collect his dirk”.

The child who survived by clinging on to sheep and who knew his name only as Jack lost both his parents. He would later be adopted by the owner of a wherry who pulled him out of the water who suitably christened Jack as John Lamb. 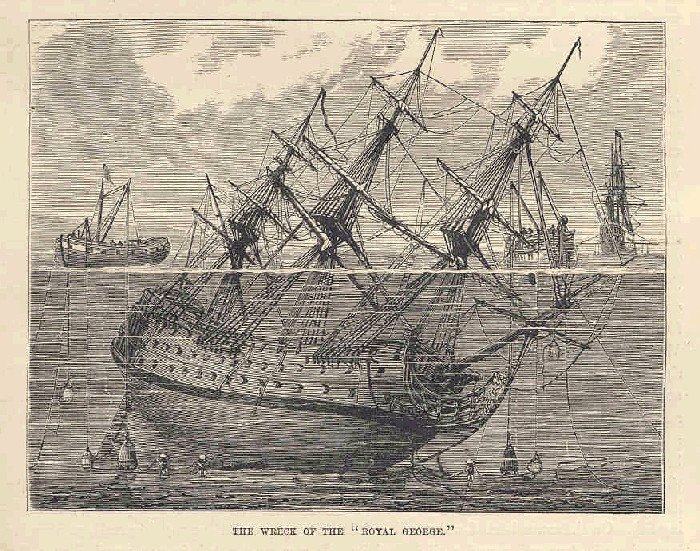 The officers and crew (many of whom had perished) were acquitted by a court-martial. The sinking was declared to be an accident due to the “general state of decay of her timbers” and that part of the frame of the ship gave way under the stress of the heel.

“Rather than condemn the failure to correct the heel in line with the carpenter’s urgent requests, the tragedy was attributed to the breaking away of a large section of the ship’s frame which was caused by decaying timbers that had been unable to withstand the healing of the ship.” 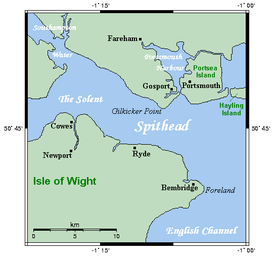 However, most historians are of the opinion that Lt. Hollingbery was responsible for the sinking. 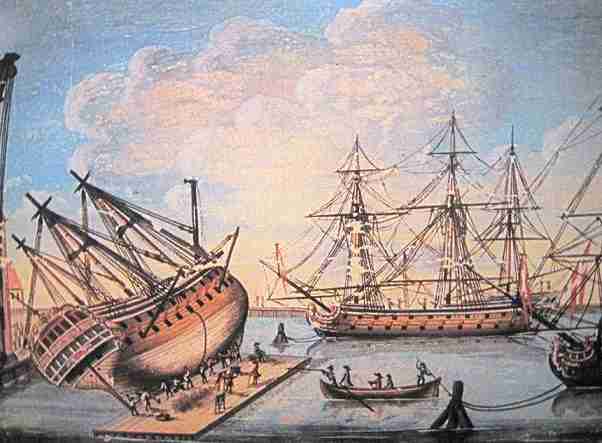 Careening a vessel in dock to clean and repair the hull

There have been other theories, some that declare Hollingbery innocent, placing blame on “unknown others” and drawing attention to the poor state of many British ships. They also argue that Kempenfelt may not have been trapped in his cabin.

“The Navy Board preferred Royal George to remain where she was, ignoring her threat to the busy lanes of shipping and until 1794 the sunken Royal George’s masts were still visible above the waterline at low tide in the Solent. The last of them was only destroyed after a frigate ran it over in the dead of night.”

She was eventually broken up under water and cleared away in a major diving operation during the 1840s.

“The fate of the Royal George has receded from national memory in recent years. The tragedy was for a long time front and centre in representations of British naval culture and the public interest was not unlike that which resulted from the loss of the Titanic more than a century later.”

Yet the loss of the Royal George did not prevent it from having a similar place in discussions of Britain’s naval heritage.

Her importance continues today, with relics from the wreck still regularly sold on online auction sites.

The ship’s bell was recovered and displayed at the Dockyard Chapel in Portsmouth, with a model capstan in Plymouth made from the metal of a cannon. 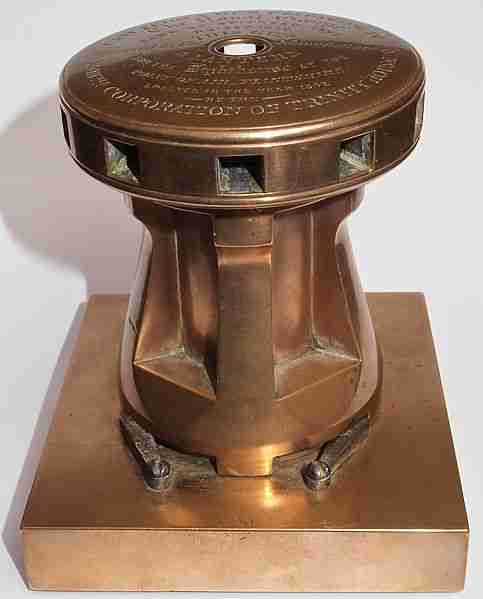 The poet William Wordsworth owned a box and a walking stick made out of the ship’s timbers and a Portsmouth publisher printed two thousand small books that contained eyewitness accounts of the sinking, all of which were bound in wood recovered from the wreck.

Miniature cannons, commemorative coins and snuff boxes were also made out of the recovered materials, and such materials were described in 1875 as “treasured by our seafaring nation”.

Many of the victims were washed ashore at Ryde, where they were buried in mass graves along the foreshore; today two gardens of remembrance mark the spot with a memorial to those who perished on HMS Royal George, alerting people to one of the worst, and possibly most avoidable, maritime disasters in the UK’s naval history.