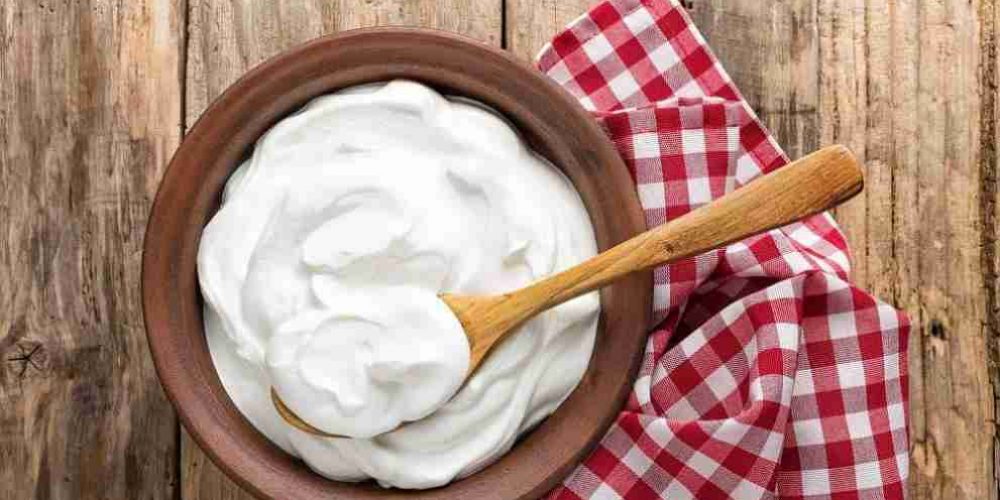 Yoghurt tastes good, is easy to eat, and it’s good for most of us. It can be much easier to digest than milk, even if  you’re lactose-intolerant, a full-fat, probiotic yogurt that contains live bacterial cultures may not cause an upset.

Yogurt is made from milk, with a dash of bacteria to kick off the fermenting process which converts the milk into yogurt. Authentic natural yogurt contains probiotics, live microorganisms which are important in keeping your gut bacteria as healthy as possible.

Research is finding “that people who are lean and people who weigh too much typically have different types of gut bacteria. This raises the question: can people change  weight if the type of bacteria in their bodies changes?” Researchers are searching for this answer right now.

“The bacteria used to make yogurt are known as yogurt cultures. Fermentation of sugars in the milk by these bacteria produces lactic acid, which acts on milk protein to give yogurt its texture and characteristic tart flavour.

Essentially yogurt is the product of these good bacteria fermenting milk and turning it into an acidic food that will stay consumable longer than milk itself. In the process, the milk becomes a kind of medicine teeming with millions of gut-loving bacteria.”

“The living cultures in yoghurt are called “beneficial, good, friendly” bacteria because they support digestion and are nourishing. When good bacteria are taken to improve health, they are considered ‘probiotics’. 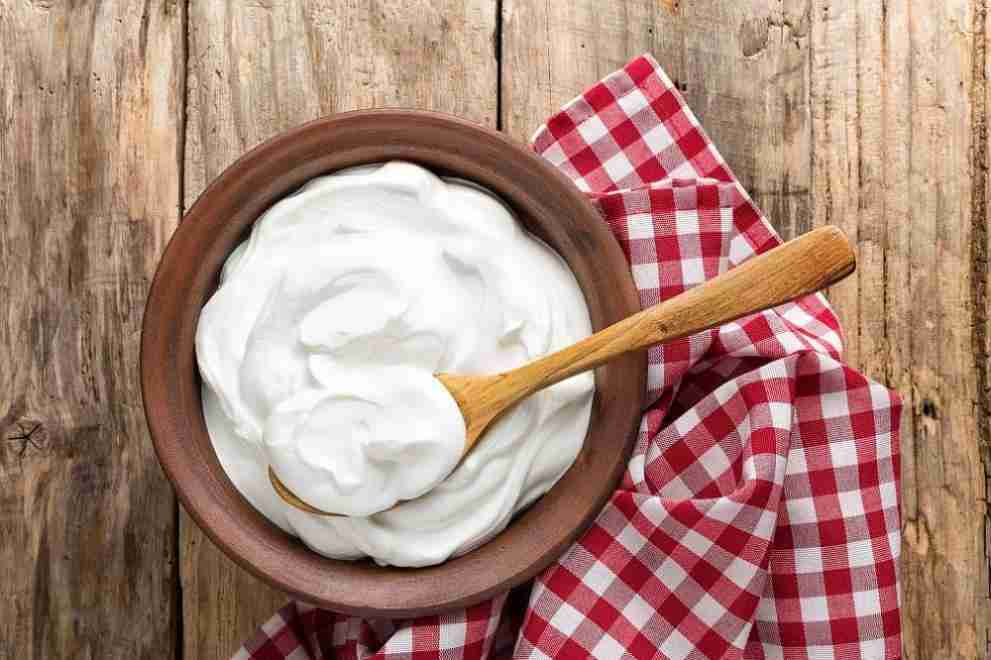 “Yogurt is produced using a culture of L. Bulgaricus (Lactobacillus delbrueckii subsp. bulgaricus ) and S. Thermophilus (Streptococcus thermophilus bacteria).  This culture of “good” bacteria is mixed into the yoghurt process at a temperature of 45 °C  maintained for 4 to 12 hours to allow fermentation to occur.”

Yogurt isn’t officially yogurt according to food  authority  standards without  the presence of the S. thermophilus and L. bulgaricus bacteria. The Natural Yoghurt Association  requires refrigerated yogurts to have 100 million cultures per gram in order to bear its “Live & Active Cultures” seal, although a frozen yogurt product needs to have only 10 million cultures per gram.

But is yogurt a health food or a dessert? Today’s yogurt can be either, depending on the type you choose ..if the yoghurt is flavoured with fruit and has added sugar it should be eaten in moderation as  a treat, not a health food.

“For help with your health, look for yogurt that has 5 grams or more of protein per serving. Greek-style yogurt generally has more protein than other types of yogurt, sometimes as much as 16 grams.” Yogurt is also an excellent source of magnesium, vitamin B12, and iodine.

Probiotics, like those found in yogurt, can help improve symptoms of some digestive problems, such as irritable bowel syndrome and certain types of diarrhea, and important effects in preventing cancer, infections, gastrointestinal diseases and asthma.”

The origins of yogurt were  recorded around 5,000 BC in Mesopotamia  (modern-day Iraq, Kuwait, Turkey and Syria).

Its use by nomadic Turkish cattle and goat herders gave the name Yogurt from the Turkish: yoğurt, also spelled yoghurt, yogourt or yoghourt, meaning “to be curdled or coagulated;  to thicken” to a food produced by bacterial fermentation of milk.

The earliest yogurts were probably spontaneously fermented by wild bacteria accumulating  in the goat-skin bags in which the Turkish herders carried their milk supply, kept at the necessary degree of warmth under the rider’s saddle. 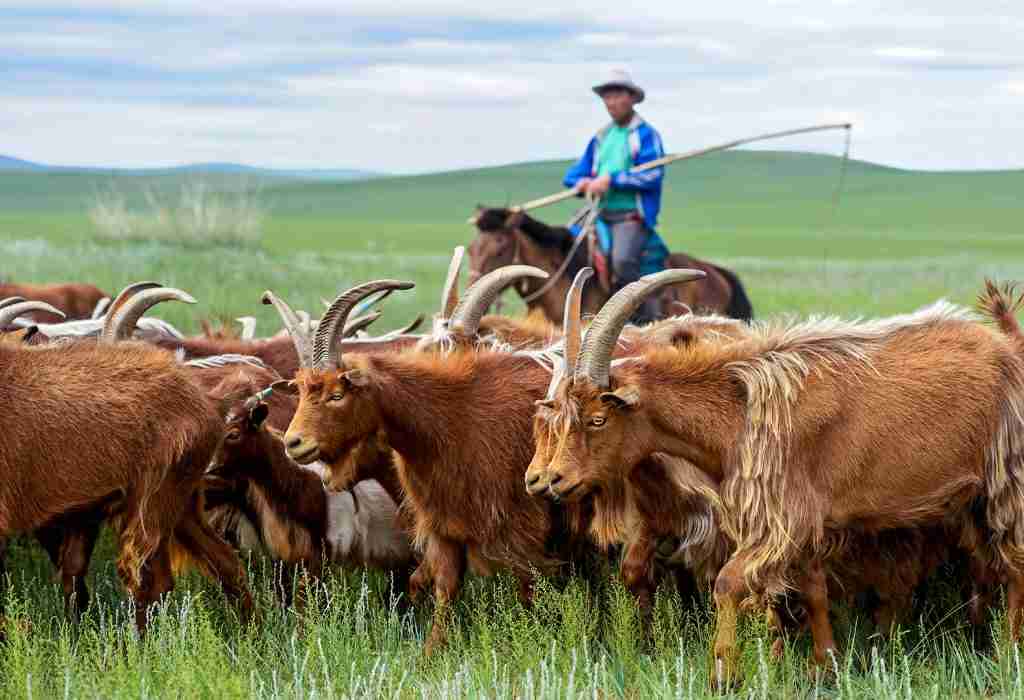 The bacteria used in those early yogurt cultures may have originated on the surface of a plant to which milk may have had unintentional contact. Equally, bacteria may have been transferred from the udder of domestic milk-producing animals

Elsewhere, in ancient Indian records, the combination of yogurt and honey is called “the food of the gods” with the cooks of  Mughal Indian emperor Akbar flavouring yogurt with mustard seeds and cinnamon.

Persian traditions hold that “Abraham owed his fecundity and longevity to the regular ingestion of yogurt”. The ancient Greek diet  included a dairy product known as oxygala which was similar to yogurt which  was consumed with honey, similar to the way thickened Greek yogurt is eaten today.

With yogurt being a staple in diets of people in Central Europe until the 1900’s the microflora of the Bulgarian yogurt was first analysed back in 1915.

When  the  Lactobacillus bacteria in the yoghurt culture was understood to be essential for good health, yogurt was popularized as a foodstuff throughout Europe.

In 1919 Isaac Carasso, who was from Ottoman Salonica, industrialized the production of yogurt. He started a small yogurt business in Barcelona, Spain, and named the business Danone (“little Daniel”) after his son. 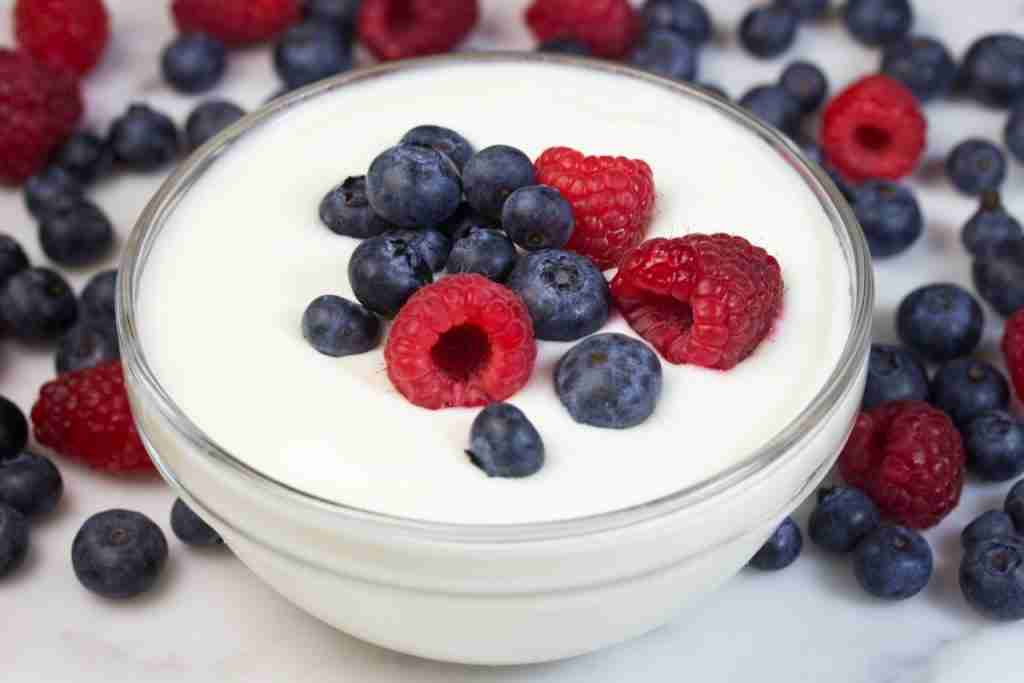 While a standard yogurt is produced using a culture of Lactobacillus and Streptococcus bacteria, addition, other lactobacilli and bifidobacteria are sometimes added during or after culturing yogurt.

Some countries require yogurt to contain a certain amount of colony-forming units (CFU) of bacteria; in China, for example, the requirement for the number of lactobacillus bacteria is at least 1 million CFU per millilitre

Greek yogurt, also known as concentrated or strained yogurt, is made by eliminating the whey and other liquids from regular yogurt.

Greek and regular yogurt share numerous health benefits due to their probiotics and protein but Greek yogurt has twice as much protein and about half the amount of carbs and sugar as regular yogurt.

“Icelandic skyr is not actually yogurt at all but is categorized as a cheese. Traditionally, skyr involves heating skimmed-milk and then adding old skyr cultures. 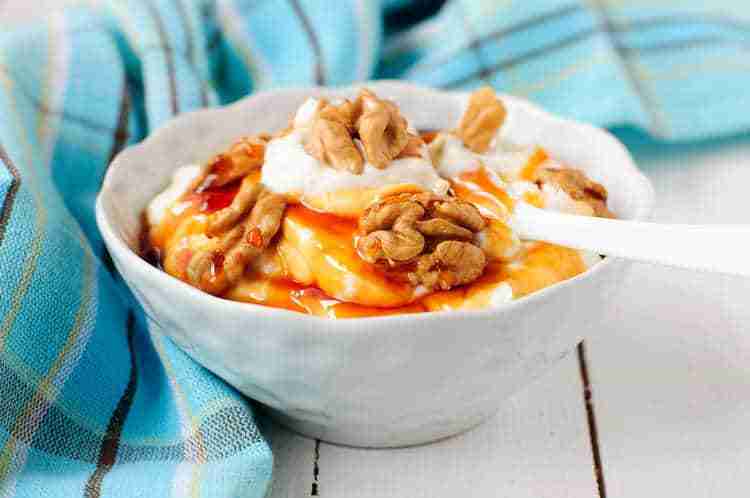 ..skyr (pronounced skeer)  is made in a similar way  to Greek yoghurt but is always made from skimmed-milk and strained more thoroughly, giving it the same consistency as Greek yoghurt but a creamy, milder taste and much higher levels of protein and pure milk”

In Gibraltar supermarkets, yogurts are available with Greek-sounding names like oykos greek-style yogurt. Skyr seems to be available mostly as  skyr-style yogurt such as the Icelandic-style Muller light salted caramel skyr. Kefir, a fermented milk drink made from kefir grains and similar to a thin yogurt, is a potent source for fermented probiotics but available products seem to be kefir-style yogurts.

Country traditions and climates affect their yogurt consumption in different ways, and all of them look delicious! In the Middle East in the summertime, “yogurt and ice cubes are mixed together with cucumbers, raisins, salt, pepper and onions and topped with some croutons made of Persian traditional bread and served as a cold soup.”

Ashe-Mâst is “a warm yogurt soup with fresh herbs, spinach and lentils. Even the leftover water extracted when straining yogurt is cooked to make a sour cream sauce called kashk, which is usually used as a topping on soups and stews.”

Zabadi is the” type of yogurt made in Egypt, usually from the milk of the Egyptian water buffalo. It is particularly associated with Ramadan fasting, as it is thought to prevent thirst during all-day fasting.”

A wide variety of local Lebanese and Syrian dishes are cooked with yogurt like “Kibbeh bi Laban”. Rahmjoghurt, “a creamy yogurt with much higher fat content (10%) than many yogurts offered in English-speaking countries”. 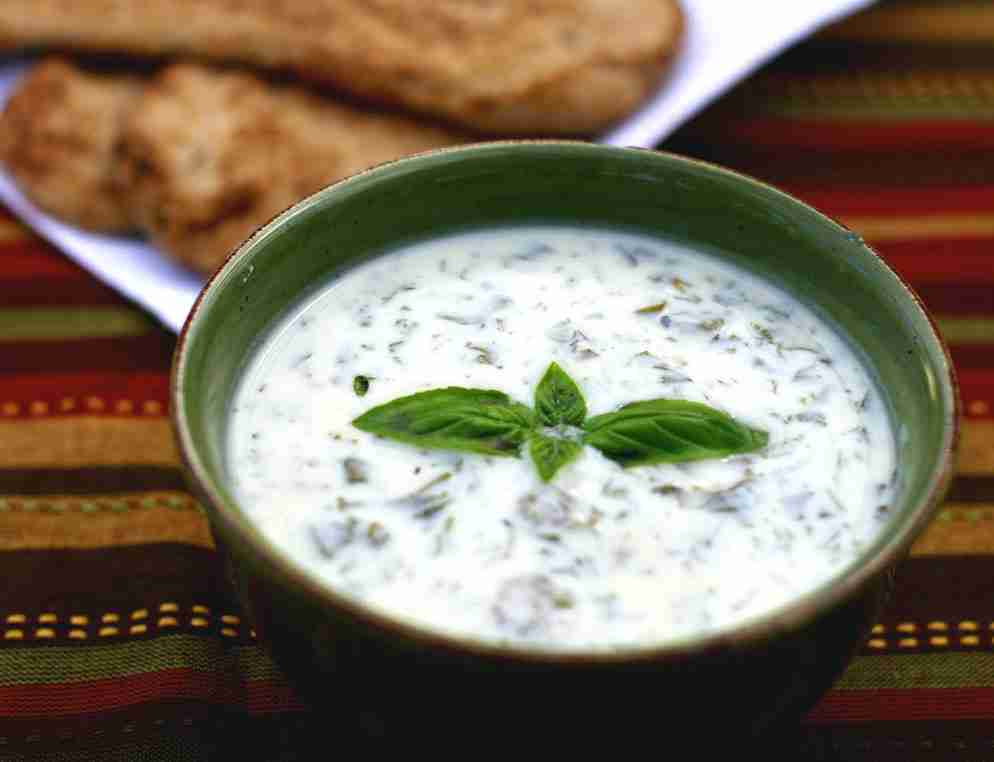 Dovga is a national meal of Azerbaijani cuisine, “a soup traditionally made from plain yoghurt and herbs. More often now, it is a vegetarian, yoghurt-based soup cooked with a variety of herbs including coriander, dill, mint, rice, chervil and mountain parsley . Some people even drink it in a glass to cool off!

In India, as well  as minty lassi on hot days and raita to cool off the spiciness of some curries, dahi is a yogurt known for its characteristic taste and consistency.

Sweetened dahi (mishti doi or meethi dahi) is common in eastern parts of India, made by fermenting sweetened milk. 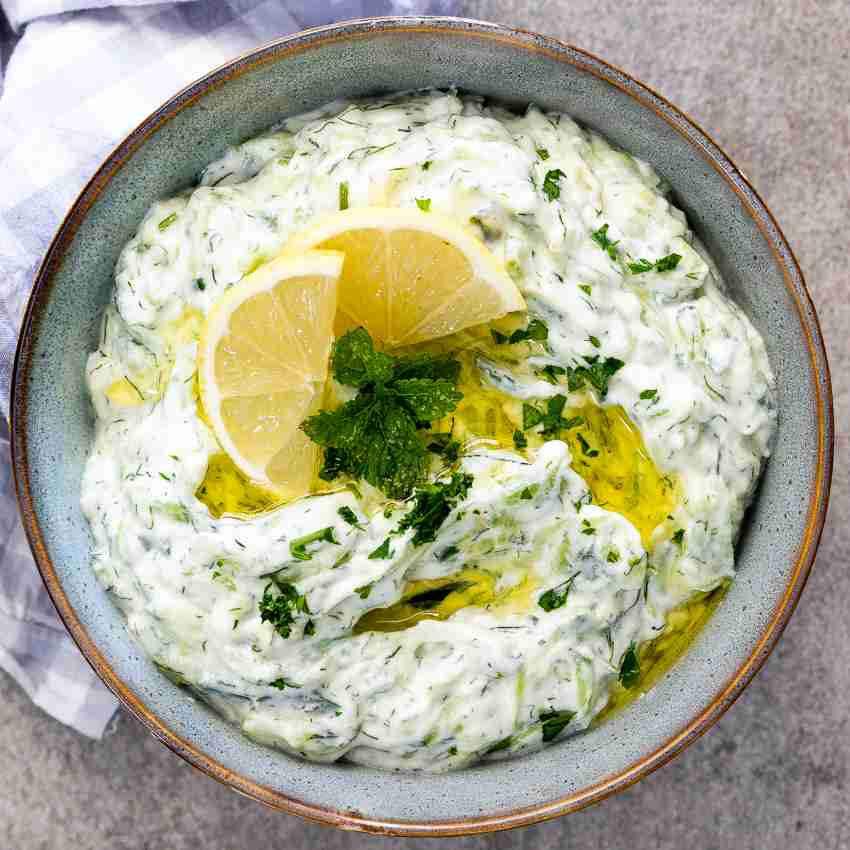 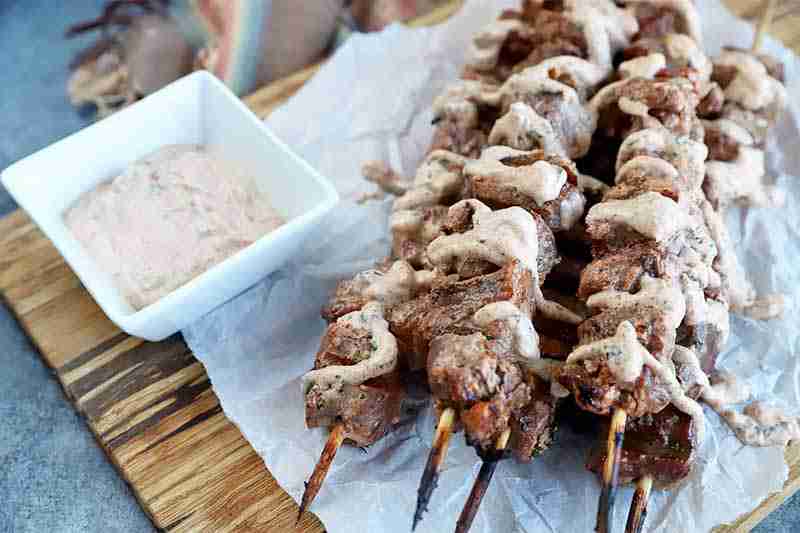 And in Gibraltar, especially  in the Moroccan-cuisine restaurants, chicken skewers with yogurt dressing are popular, as are grilled meatballs with yogurt..a great way to enjoy eating a food which is  good for your health!