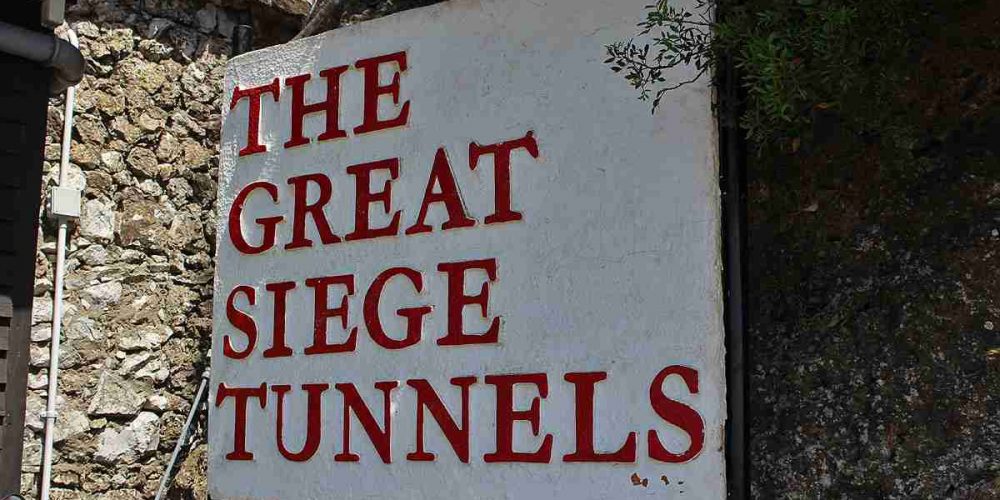 Exploring the Great Siege Tunnels of Gibraltar is most certainly not something you want to miss out on doing during your next visit to Gibraltar.

One of Gibraltar’s most greatest attractions, they were carved out by the Merchant Marines in order to defend Gibraltar during one of the many sieges, this one aptly called the Great Siege of 1779 to 1783.

During the time of the American War of Independence against Britain, perhaps taking advantage of a time when Britain’s attentions were focused elsewhere, Spain and France took the opportunity to advance and attempt to recapture the “Rock” from the British, and began what was the fourteenth siege against Gibraltar, always known as the Great Siege.

In July of 1779 till February of 1783, the Rock was under siege, and gradually the Spanish and French troops advanced, until in the latter part of 1782, the troops were so close to the Rock that it appeared that none of the existing batteries of Gibraltar could fire upon them due to the angle.

It is said that the governor then, General Elliot, offered a substantial reward (a bounty of 1,000 Spanish dollars) to anyone who could find a way to get the cannons onto the northern face of the rock, which was known as the “Notch”.
Sergeant-Major Henry Ince, an ex nail-maker, then miner and preacher, before enlisting in the Queen’s Royal Regiment of Foot, was credited with finding the answer, though its unknown if he actually received his 1,000 dollar reward.

According to a story however, handed down by the descendants of soldiers, who had served in the company, he did end up receiving one guinea per running foot. If this were the case, it would have amounted to quite a reasonable sum of money.

Sergeant-Major Henry Ince, who was a member of the company of Military Artificers, forerunners of the Royal Engineers, said that he believed this could be accomplished by tunnelling a gallery through the “Rock” and he was granted permission to begin the work.

Relying only on brute force, the muscle of their arms, their sledgehammers and metal bars, the company of men used gunpowder to blast out part of the tunnel, and made their way through about eighty feet of rock and dirt.
As the work moved along, the fumes that emitted from the blasting gunpowder began to take its toll on the men and they decided to vent the area to release it and afford themselves some fresh air.

The original goal of the tunnels was to give the men the ability to get a cannon from where they were, over to the northern face of the rock which is known as the Notch, but after making an opening and seeing the advantage of mounting a cannon right there within the tunnel, the initial “Notch” plan was upgraded to a totally new and improved idea.

Nearly as one of the men realized what an incredible opportunity this would be and how well it would work for the cannons. Almost immediately, one was mounted at this initial opening, without waiting for their tunnel to reach the “Notch” area.

After this, more cannons were taken into the tunnels and holes were cut into the rock all along the side that faced the mainland. When the visitor is crossing into Gibraltar, if you look carefully, you will see the holes in the face of the “Rock” that tell of this incredible feat.

Interesting Fact
After a ceasefire had been declared, the Duc de Crillon, the French General commanding the Franco-Spanish army, visited the tunnels. So amazed at their accomplishment, he exclaimed, ‘These works are worthy of the Romans!’
When the cannons were laid in place, a rod was placed above them and wet clothes hung from it, to prevent the sparks from the cannon from flying backwards and igniting the remaining powder.

Some areas in the tunnels went up nearly a story or two, and were for the very brave or the very foolhardy to traverse, while other areas lay on the ground, so the shooting could take place from multiple levels.

In the beginning the tunnel was only 82 feet long, however by the end of the Second World War, when diamond drills and better methods of tunnelling existed, the tunnels traversed a distance of more than thirty miles in length, winding and turning as they went.

Today, the visitor to the Great Siege Tunnels will note that they seem to go on for eternity, and that upon entering on one side of Gibraltar, you can quite literally end up nearly on the other side of the Rock.

On that note, make sure that you wear comfy shoes when you visit the Great Siege Tunnels.

It’s been said that the hike down into the tunnels is fairly easily accomplished as its downhill most of the way, but lest we forget, there is also that return trip! The unique perspective of a history of multiple sieges and multiple rulers make it an unforgettable experience.