Salami, salchichon or both? 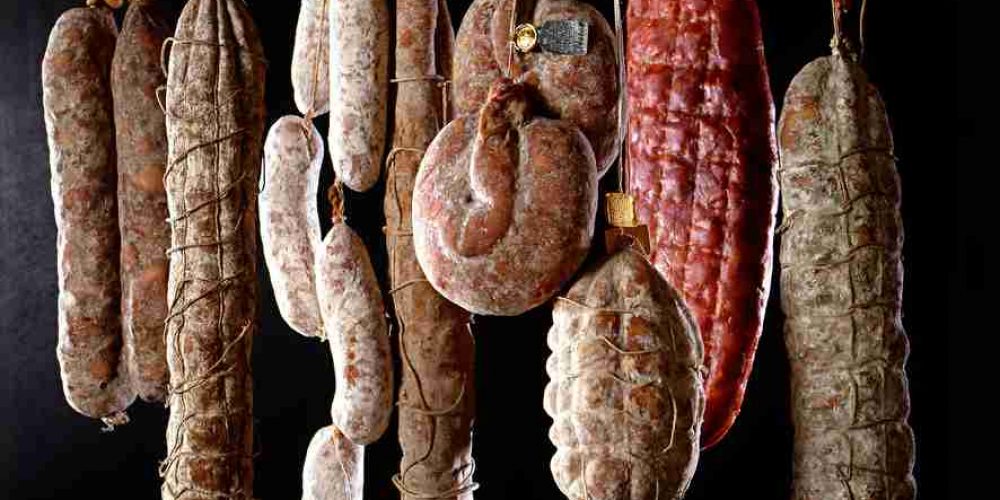 Salami, salchichon or both? Visit the local charcuterie or deli counter at the supermarket and in the meats’ section will be an array of shapes and sizes, colours and lengths of white-coated tubes laid out alongside each other.

In some specialist shops they’ll be hanging in rows around the shop.

These are processed meats, mostly made from pork, that have been processed/cured through salting, drying or smoking. They are well-known by their country or regional name but perhaps not so much by their individual brand name, except by enthusiasts.

Among the many different processed meats on the counter will be salami, salchichon and saucisson. At a glance, they may seem very similar. 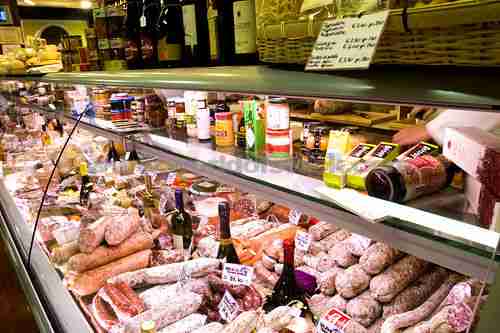 at the deli counter

All are types of sausage made from minced cured meat and their origin is the main difference between them – while salchichon comes from the Spanish cuisine, salami comes from the Italian one, and the saucisson from France.

Another factor that tells them apart is the diameter of the casing with the salchichon casing being much thinner and narrower than salami.

Both are made with pork ham, the leanest part of the animal, minced with the fat included to give a smooth texture and distinctive flavour.

This mixture is seasoned with salt, black peppercorns and ground white pepper and often with nutmeg, and other spices.

Salchichon sausage tends to be spicier than a standard salami, with a slightly creamy texture from the fat, although there are also many spicy varieties of salami.

Once the minced meat  is stuffed into natural casings, it is left to dry in cool open air, or smoked.  This process causes the outside of the sausage to whiten giving its appearance one of its most distinctive features. 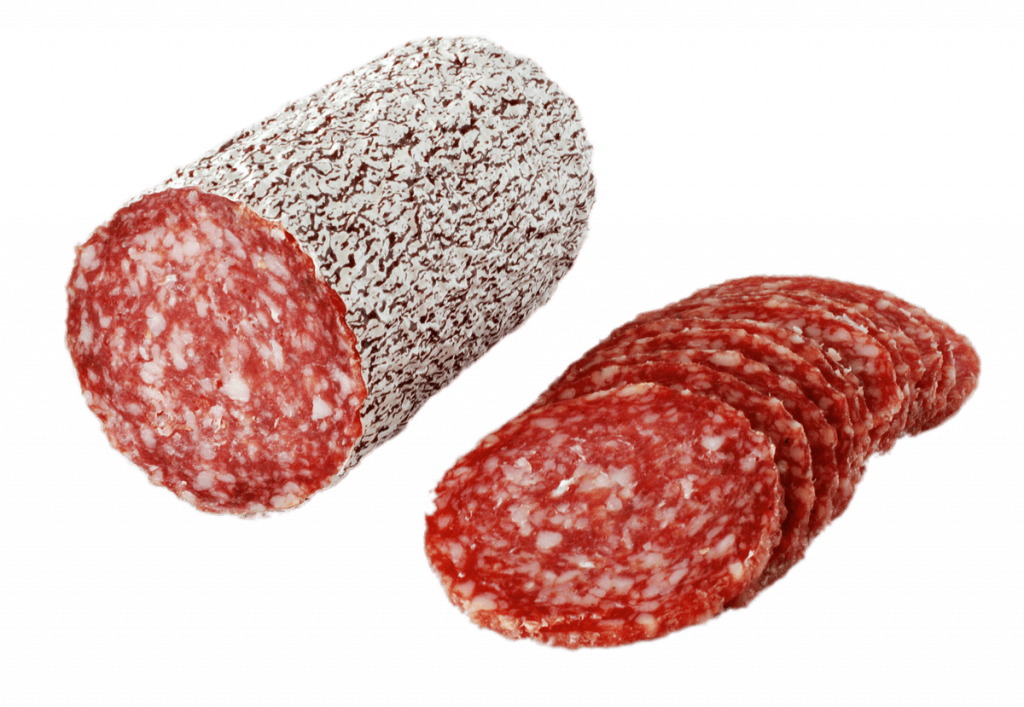 Salami and salchichon are sold ready to eat without a need to be cooked as they are ‘dry cured’ until safe to be consumed. However, once a cured sausage has been cut open, it should be refrigerated, as the cut exposes the interior of the sausage to the risk of bacterial contamination.

The white powdery dusting which covers the salchichon casing is a benign white flora, a type of mould. Although normally  the casing is removed before eating as this is a “good” type of mould, which helps cure the salami and fend off evil, nasty bacteria, the skin casing is safe to eat, although it can be a little chewy.

Is it safe to eat cured meat?

“Cured and processed meats are as bad for you as cigarettes, alcohol and asbestos”, the World Health Organisation (WHO) has said in a recent study.

Food items such as salami, ham, sausages and bacon were ranked in the highest possible risk category as being cancer-causing, while red meat was grouped in the next level as being a “probable carcinogen”.

Processed meats are now in the same cancer risk group as tobacco/smoking but the amount of risk is still a matter of the greater the amount of processed meat that is consumed – more consumed, the higher the degree of risk.

“However, to put it in perspective, the overall risk of smoking is 2000% higher than that of consuming processed meats. So, even though they are in the same category, the risk factor is not the same.”

Nevertheless, the study  found that people who ate a lot of processed meats  – more than 20 grams a day, the equivalent of one thin strip of bacon – were much more likely to die of heart attacks and stroke, and also had a higher cancer risk. 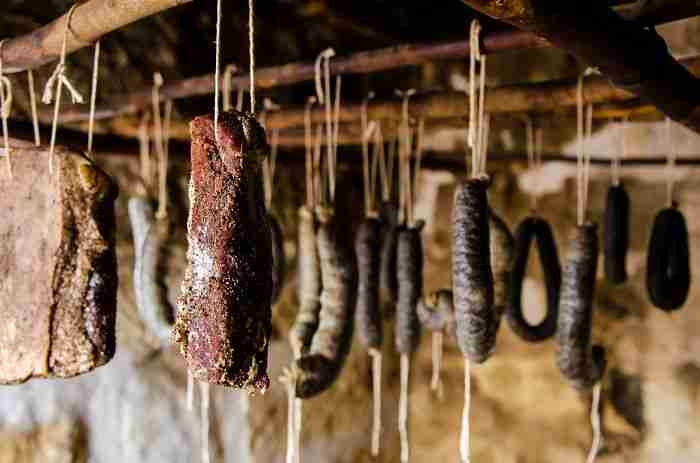 Clearly,  the greater the quantity and frequency of  processed meats consumed , the greater the risk, so looks like salami and salchichon should be consumed as occasional  treats and not a staple of the daily diet.

The WHO study defines processed meat “as meat that has been transformed through salting, curing, fermentation, smoking, or other processes to enhance flavour or improve preservation.”

“The word ‘cured’ implies combining various meats with a mixture of salt, sugar and nitrites to preserve colour, flavour and texture. So no doubt about it, cured meats contain a ton of salt.”

Humans have been curing meat for thousands of years. Salting and smoking were developed to allow storage of excess meat for use throughout the year. Salt was rubbed on the meat and allowed to “cure.” Actually, nitrates were naturally present in the salts used in curing and played a large role in the process, perhaps unknown to the butchers in those early days 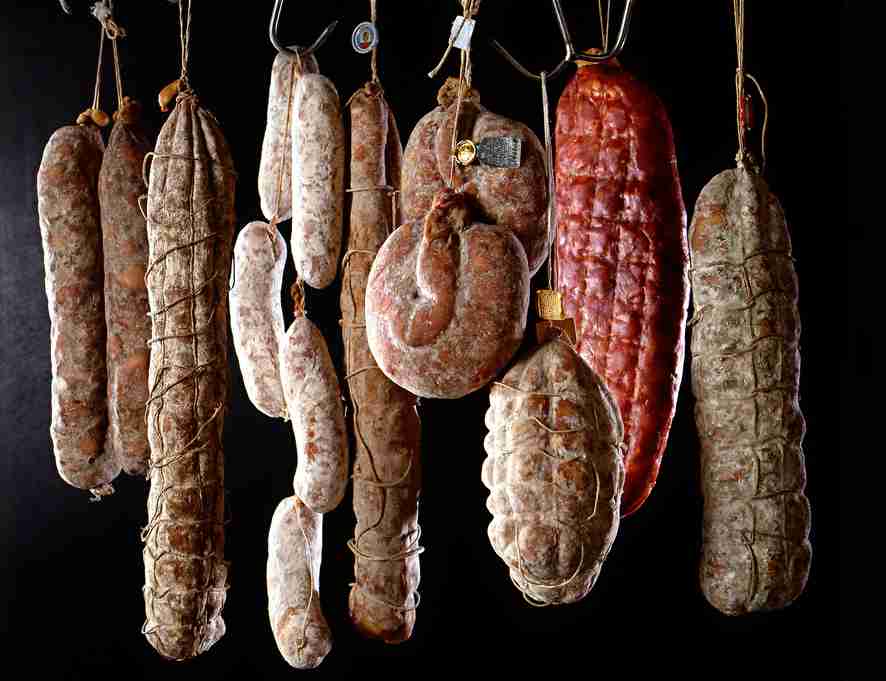 many ways of processing meats

Nitrates, found naturally in soil and water, are molecules made up of nitrogen and oxygen. Fruits, vegetables, and grains naturally contain nitrates with vegetables contributing the largest amount of nitrates to our diet.

Nitrites, with an i, form via the breakdown of nitrates when an oxygen molecule is lost. Nitrite is now known to be the chemical agent that drives the curing process, rather than nitrate.

It  produces the characteristic flavours and pink colour of processed meats. It also preserves the product, extending its  shelf-life and keeping  the product safe from bacteria such as clostridium botulinum, the cause of deadly botulism.

Salami is made of pork, beef, veal, horse, donkey, poultry or game. Pepperoni, an American variety of salami and now one  of the best-known, limits  its ingredients to  cured pork and beef seasoned with paprika or other chili pepper. 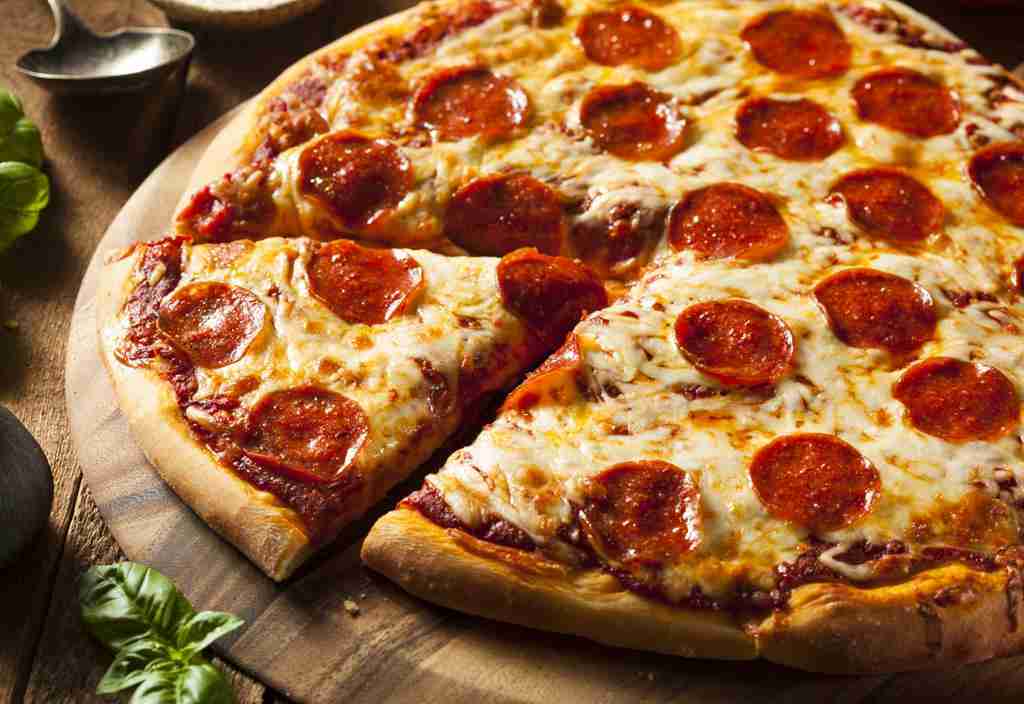 “Thinly sliced pepperoni is a popular pizza topping in American pizzerias. It is characteristically soft, slightly smoky, and bright red in colour and belongs  to the more spicy varieties of salami.”

Among the other most popular salamis there are, for instance, salami Milano, Felino salami (from the village of Felino  in the Parma region of North Italy), highly valued for its quality and salami  and salami Napoli (Naples) made from beef and heavily spiced.

At Gelli Salumi, near Siena in Tuscany  they describe their salami as “a delicious wild boar salami produced by artisan experts  using finest quality meat and aromatic herbs.” 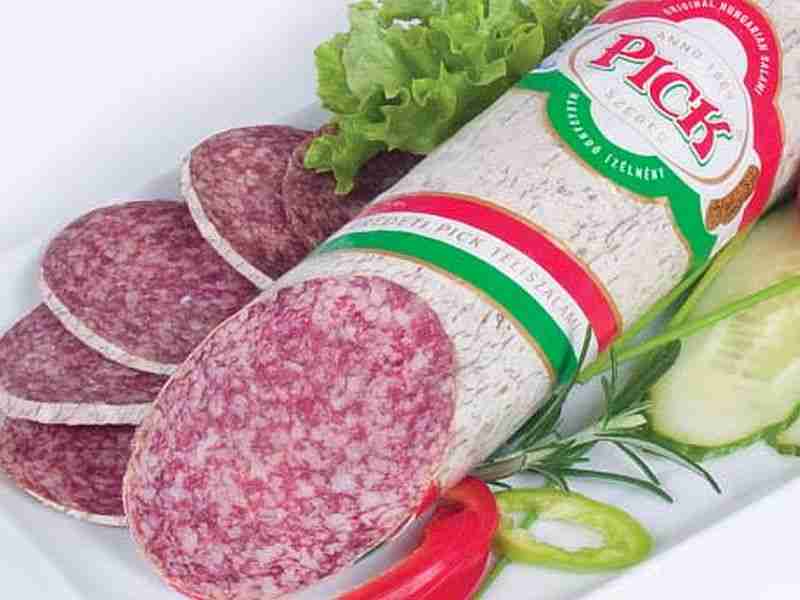 The  Hungarian variety of salami , Pick,  is made primarily with pork seasoned with spices while a traditional artisanal French salami may include red wine. 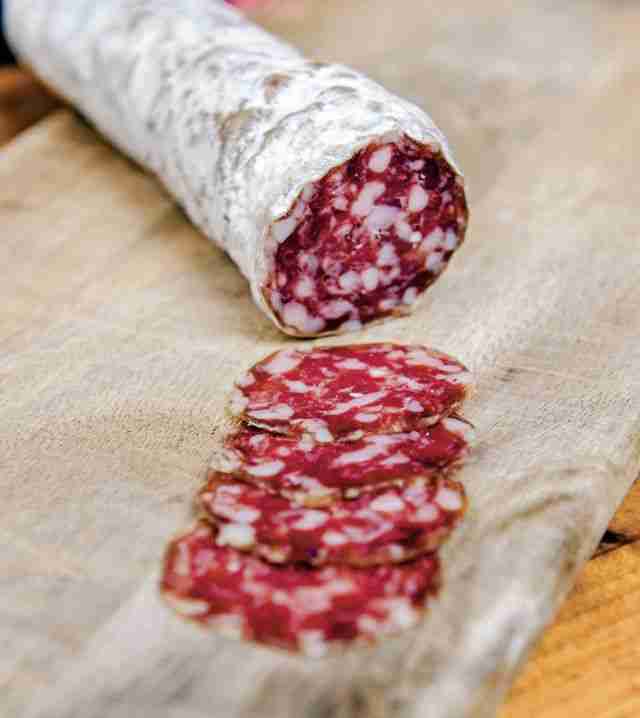 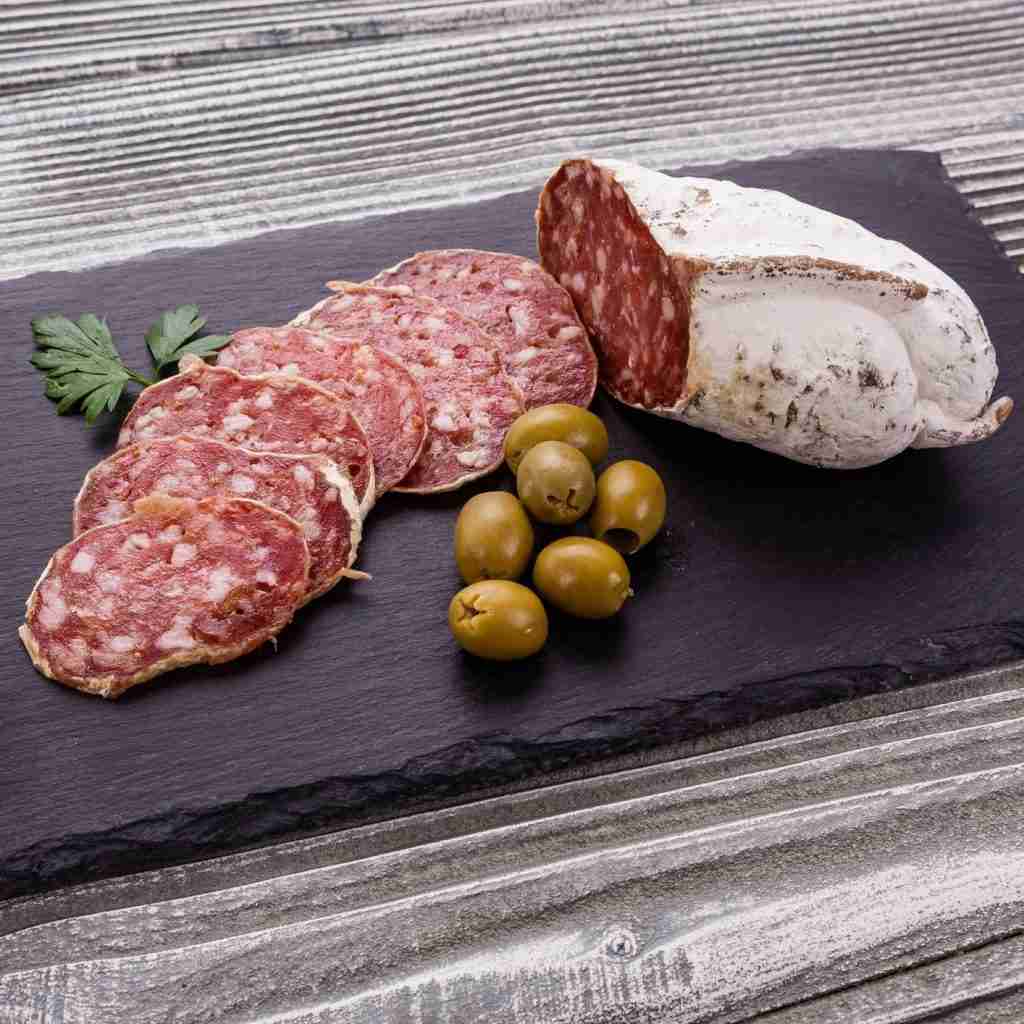 South America has several salami-producing regions..In Argentina salami is known as salame, and along with ham is one of the most popular cold meats of the region..but perhaps more than salami it is salchichon that is best known such as  the  “cervecero”  typical of many  South American countries, especially Chile, while salchichon with pistachio is  popular in Venezuela.

“The most characteristic features of salchichon are its intense and brilliant red colour and  firm and compact texture. It also has a delicate and sweet taste that contrasts with its spiciness giving it its  characteristic. aroma and flavour”

Salchichon is mostly made with pork  although some recipes use other meats including ox, veal,  horse and  wild boar. The Extremadura region of Spain produces a wild boar salchichon which is made with “the best lean meat of Iberian pigs , cellar-dried for five months and seasoned with just the right touch of black pepper” 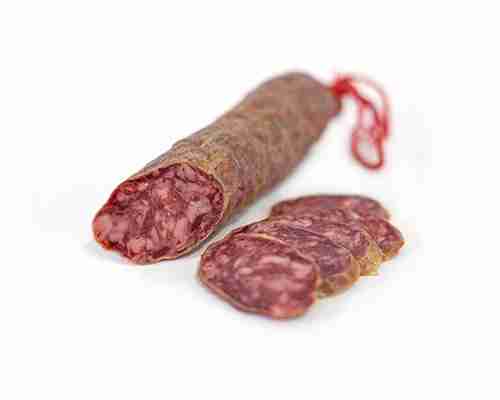 Lean salchichon made with turkey or chicken variants have  become more popular, mainly for health reasons as these are a lower-fat option, and for  a smoother taste compared to the traditional  meats.

A  salchichon is even available as  a variant for sweet lovers: chocolate salchichon as a dessert.. “with the  lean pork meat replaced with chocolate, and with the  fat flecks  represented by nuts such as walnuts, almonds or hazelnuts”.

Which one to buy ?

What to look out for in the deli to buy ..? many regions of Spain produce salchichon..well known is Vic La Plana from Vic, Catalonia with Salchichón Ibérico being  the one that comes from Extremadura and Salamanca. 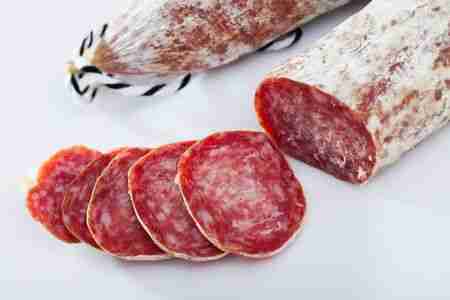 The product thickness is the key. The casing used in each of these three sausages has a different thickness as a larger diameter casing requires longer maturation period.  Salchichon is the thickest, followed by the longaniza.  The fuet is easier to recognize because its casing is the finest and thinnest of the three. 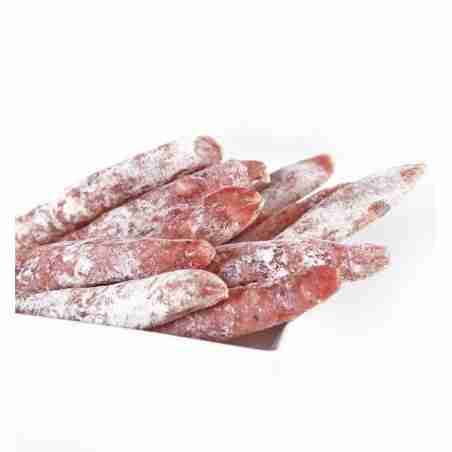 Salchichon and chorizo:  one of the easiest ways to tell them apart is their colour, making it easy to distinguish them at a glance. The reason for this colour difference lies in the flavouring used in their preparation and also the drying period. In both sausages the meat is minced, but  is much finer in chorizo than in salchichon. The flavour is very different, with salchichon including pepper and other hot spices, while chorizo uses  paprika, garlic, oregano and nutmeg to give its distinctive flavour.

How to eat them

Although enthusiasts for salami and salchichon prefer to eat them  sliced and on a platter or in a roll, one recipe is popular and well-worth a try..a cheese and salchichon tortilla..and here’s the recipe for it. 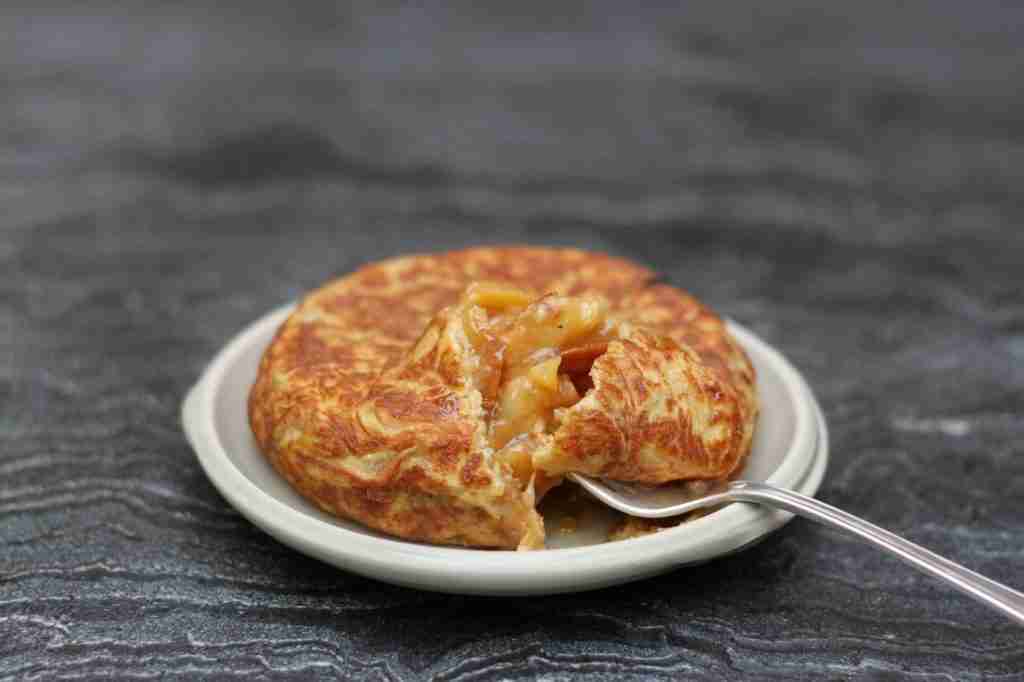 A small Tortilla with salchichon..Ingredients: two eggs, salchichon cut into small pieces, a few thin slices of cheese and salt.

Preparation:  beat the two eggs with a pinch of salt. Add  the sausage and put the mixture in to a tortilla pan preheated with a splash of oil.

Place thin slices of cheese on top and carefully wait  until the tortilla  is perfectly cooked.

Serve on a plate and enjoy it as a main dish or as a hot snack accompanied by your favourite fruity wine.

Enjoy but don’t eat too often!