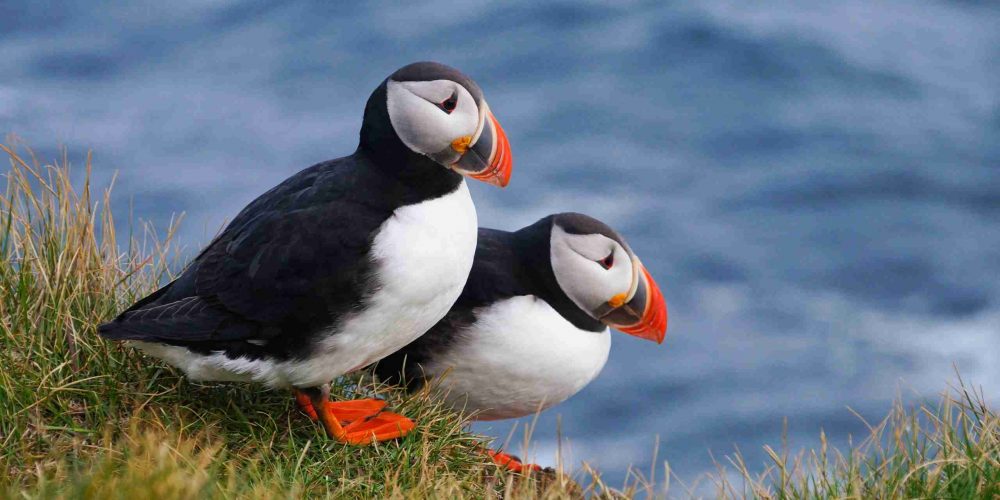 Bird-watching during the Global Bird Weekend 17/18 Oct produced in the early counts, supported by binocular-makers Swarovski Optik, total species to date 5,725 recorded by 14,220 birders across the world and also produced some interesting questions about bird-watching, especially about migration. One of those questions, is “Where do UK puffins go in winter?” …answer is, puffins spend the autumn and winter out at sea but return to land to breed in late spring.

In Gibraltar, three species of puffin have been recorded including the Atlantic puffin.

In Gibraltar, three species of puffin have been recorded including the Atlantic puffin. In summer months in the North puffins will be seen in quantity in their colonies on the cliffs of Shetland and Orkney and further north in Iceland, home to more than half of the world’s puffin population but where do they go once the winter months arrive?…that, it seems, depends where the puffin colony is based but the UK’s puffins, the Atlantic puffin (fratercula arctica), spend the winter out at sea, in the North Atlantic and Arctic Ocean, feeding on fish and marine invertebrates. They are well-adapted to a life lived mostly on the water and can even drink seawater and expel the excess salt out of glands in their nostrils – “If it wasn’t for the fact that they had to lay an egg, puffins probably wouldn’t come to shore at all,” explains Steve Kress, founder of the National Audubon Society’s Project Puffin. Superbly adapted to marine life, the shape of their wings enables them to ‘fly’ under the sea as well as above it. They have great agility in the water but less on land, which is why they probably nest in burrows and cliff edges close to the sea returning to their more natural environment as quickly as possible.

Prior to the breeding period, the adult birds return to their colonies but spend most of their time on the sea in large flocks known as ‘rafts’. The black, white, and orange feathers are completely waterproof so the tiny birds can spend epic lengths of time at sea, with their fledglings riding the waves for a full two years before ever setting foot on land.

The Puffin is a regular winter visitor in the open sea of the Southern Mediterranean including Gibraltar, and of the  24 species worldwide of puffin, three species  occur in Gibraltar, including the Atlantic puffin which is classed as a common migrant to the area. Belonging to the group of birds known as auks, the puffin has one of the most distinctive beaks of any bird. In the breeding period, the broad beak is boldly marked in red and black, with feet bright orange and its plumage a very smart black crown and back.  Pale grey cheek patches and white underparts change as the puffin moults while at sea in the winter and some of the bright-coloured facial characteristics are lost, but with the colour returning again during the spring..

As the Strait of Gibraltar is the narrowest crossing point for birds migrating to and from Europe and Africa. The Rock offers very special bird-watching opportunities. 315 species of birds have been recorded, many of which are migratory – the avifauna of Gibraltar include a total of 311 species, of which seven have been introduced by humans and 128 are rare or accidental in Gibraltar. Five species are globally threatened. 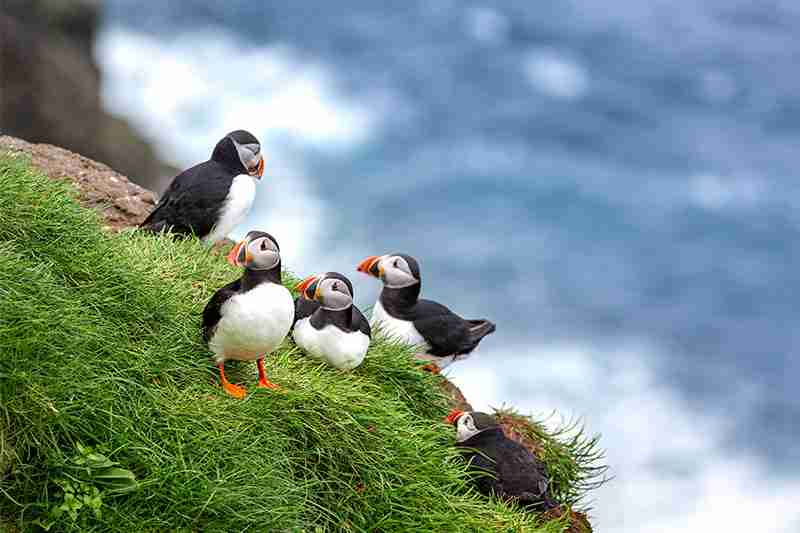 GONHS, the Gibraltar Ornithological and Natural History Society, produces a Bird List in which the status of each species is summarised briefly with fuller details given in “The Birds of Gibraltar” (by J E Cortes, J.C Finlayson, E.F.J Garcia & M.A.J. Mosquera, 1980, available from The Gibraltar Bookshop) and details are also available in Birds of the Strait of Gibraltar by Clive Finlayson

The Strait of Gibraltar Bird Observatory, at Jews’ Gate, run by GONHS, controls ringing and observation of birds in Gibraltar, the latter including daily counts of diurnal migrants (day-time travellers). Located at a strategic point on the southwestern slopes of the Rock, giving commanding views over the Strait and Bay of Gibraltar the Observatory itself offers inexpensive hostel-type accommodation to resident ringers, with  visitors and helpers always welcome. A second observatory at Europa Point is used for seabird observation. Also on the Rock are the Gibraltar Botanic Gardens, with  six hectares of subtropical vegetation where the wildlife includes resident and migrant birds, and  the Gibraltar Nature Reserve (formerly the Upper Rock Nature Reserve). The Rock has been identified as an Important Bird Area by BirdLife International because it is a migratory bottleneck, or choke point, for an estimated 250,000 raptors that cross the Strait annually, and because it supports breeding populations of Barbary partridges and lesser kestrels. 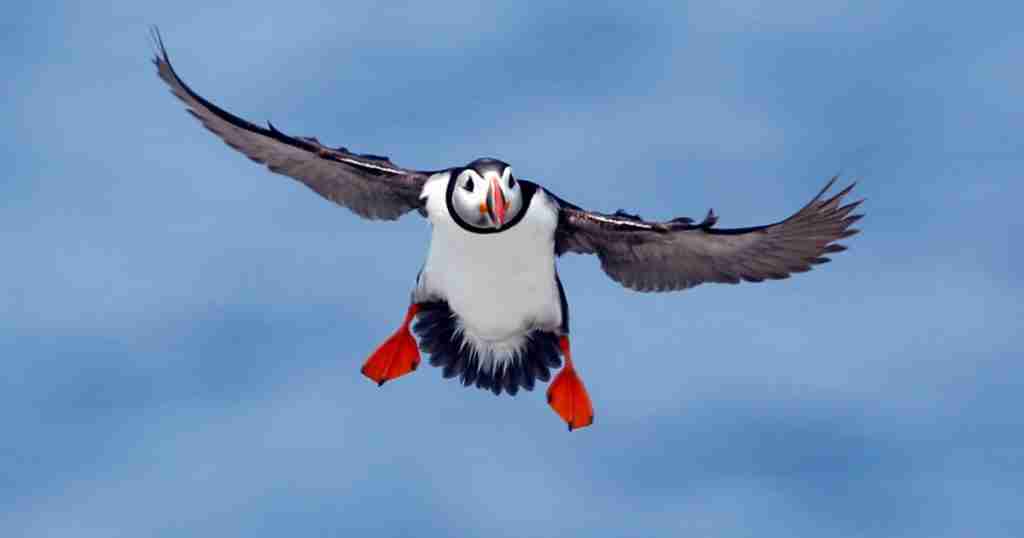 As well as land-based birdwatching, those who go to sea in sailboats around the northern islands in the Atlantic and then also set sail in the waters  around Gibraltar, need to keep their eyes peeled for the chance in both areas of sighting of a puffin. “I once spotted a solitary Puffin off the Spanish coast near Sotogrande, while on a sailing trip out of Gibraltar. They do disperse around coastal waters all over Europe”, reported one yachtsman.

Sadly, puffin numbers in some regions have declined quite drastically for a number of reasons so the puffin is now officially listed as threatened, reported by National Geographic’s Protecting An Open Ocean Oasis – also reporting that the Atlantic puffin is considered vulnerable to extinction is  the International Union for the Conservation of Nature, in part because climate-change seems to be affecting the bird’s prey. Indeed, Kress, of Project Puffin, says two of the puffin’s favourite foods, herring and white hake, as well as sand-eels for young birds, have been shown to be sensitive to changes in surface sea temperature, which makes protection of the puffins’ wintering grounds all the more important. Nutrients that rise to the surface along the underwater mountain ranges support a vibrant ecosystem that includes corals the size of small trees, schools of halibut and cod, pods of whales, and even surface-feeding seabirds.

However, there also seems to be another human-caused reason for the crisis caused by the decrease in food-stocks for the puffins, in particular the sand-eel (not related to the true eel). 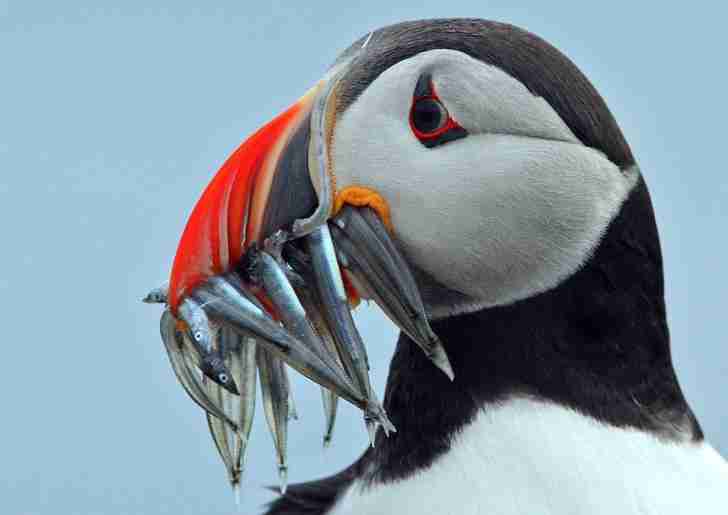 UK fishing industry reports that puffins and other seabirds in the Atlantic are unable to find enough sand-eels with which to  feed their young after Danish vessels in 2019 stripped British waters of sand-eels worth up to £80m. The Danes control 94% of the quota for UK sand-eels and in 2020 are now increasing their annual take from 82,000 to 458,000 tons a year. Most of the catch, taken around Dogger Bank in the North Sea, is crushed into fishmeal for Denmark’s intensive salmon, mink and livestock farms.  The RSPB  also fears for the survival of the puffin,  and kittiwake, both of which rely on the small sand-eels with which to feed their young which cannot in their early stage of life eat bigger fish.

“The sand eel fishery is important, both for Danish fishermen and the Danish fishmeal industry,” says Denmark’s fisheries and food minister Mogens Jensen. “It is, therefore, gratifying that…fishing for sand-eels can start on April 1. I am particularly  pleased to see that the scientific advice has led to a doubling of quotas.”

Customers at fish restaurants in the Southern Mediterranean who like to enjoy a plate of fried small fish, pescaito frito, may reflect that very often it will be sand-eels being served up, caught by trawlers off the north coasts of Europe. Perhaps with less human consumption of the sand-eel, as well as lesser quantities of the sand-eel being processed  for the fishmeal industry, there would be a greater chance to see puffins wheeling and turning out to sea off the Mediterranean coasts as well as in the North.