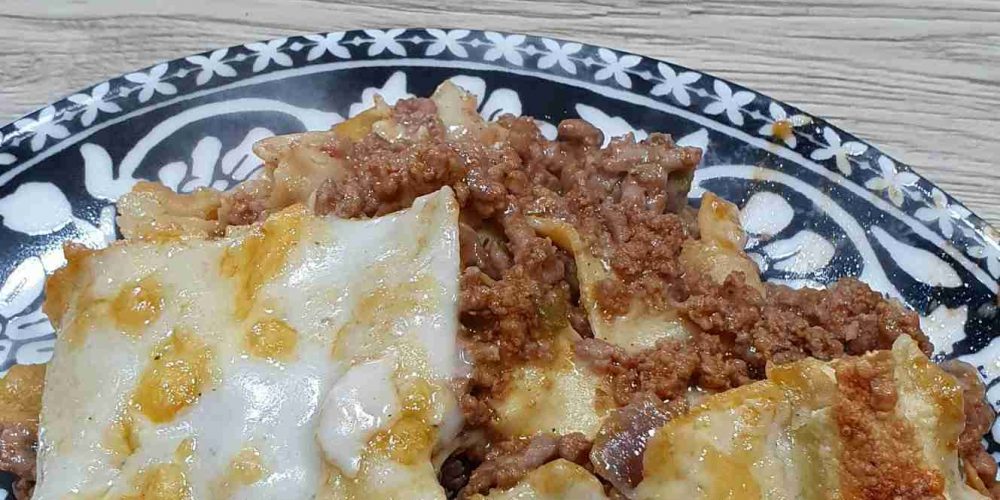 Mark Montovio shares some of his much loved local, and world recipes, opening up possibilities for making each dish to suit a variety of families, different tastes and particular dietary needs. Combining his love of different cultures and world cuisine, he is also committed to preparing meals, which are nutritious, tasty and good to look at, with minimum waste and using seasonal produce.

There is nothing more comforting than a warm and creamy lasagne on a dull chilly day!

There are many versions of this dish. Pastitsio takes its name from the Italian pasticcio, a large family of baked savoury pies which can be made using meat, fish, or pasta. Many Italian versions include a pastry crust and some include béchamel. The word pasticcio comes from the vulgar Latin word pastīcium derived from pasta, and means “pie”, and it has developed the figurative meanings of “a mess”, “a tough situation”, or a pastiche.

A pastiche is a work of visual art, literature, theatre, or music that imitates the style or character of the work of one or more other artists. Unlike parody, pastiche celebrates, rather than mocks, the work it imitates.

In Cyprus and Turkey, this dish is called “oven macaroni”, and of course the dish we enjoy in Gibraltar in Italy is referred to as lasagne al forno.
The typical Greek and Turkish versions has a bottom layer that is bucatini or other tubular pasta, with cheese and/or egg as a binder; a middle layer of minced beef, or a mix of minced beef, and pork, with tomato sauce, cinnamon and cloves. Other spices like nutmeg or allspice are used in the top layer that is a béchamel or mornay sauce. Grated goat’s cheese is often sprinkled on top and pastitsio which is a common dish, is often served as a main course, with a salad.

Pasticho (Pasticho Venezolano) is the Venezuelan version of lasagne or the Greek Pastitsio. I have to admit that once I tried the subtle differences I was hooked on it. There are two main ingredients that enhance the flavours intensely. The meat is seasoned with soy sauce, there is a considerable Chinese influence in the country, and with what they call, salsa inglesa, basically Worcestershire sauce.

So other than using those two ingredients to spice it up the Venezuelan way, the process is simple.

Fry onion and garlic and some peppers if you wish, adding some herbs; oregano and parsley are great. Then fry the mince and add either chopped tomatoes, with a spoonful of tomato puree, or good shop bought tomato passata. The béchamel sauce again holds no mystery. I use a whisk to mix and the trick is to use equal amounts of butter and flour , making this into a paste, and then slowly adding milk as required to make half a litre or so of sauce. Usually two spoonfuls of butter and flour do the trick. You should add salt and pepper to both sauces and then start the layering process.

Again there are different ways of doing this but I like to start with a layer of béchamel followed by lasagne sheets, covered with béchamel again, some cheese and then topped with the meat sauce. I usually repeat this process three times and add much more béchamel sauce on the final layer with a good sprinkling of cheese.

Cooking time will vary and you must check the package because each make is different and it is best to follow that.
Pasticho is definitely a dish you will continue to make because of its enhanced flavours making it a rather more exotic version of the traditional lasagne we are used to.