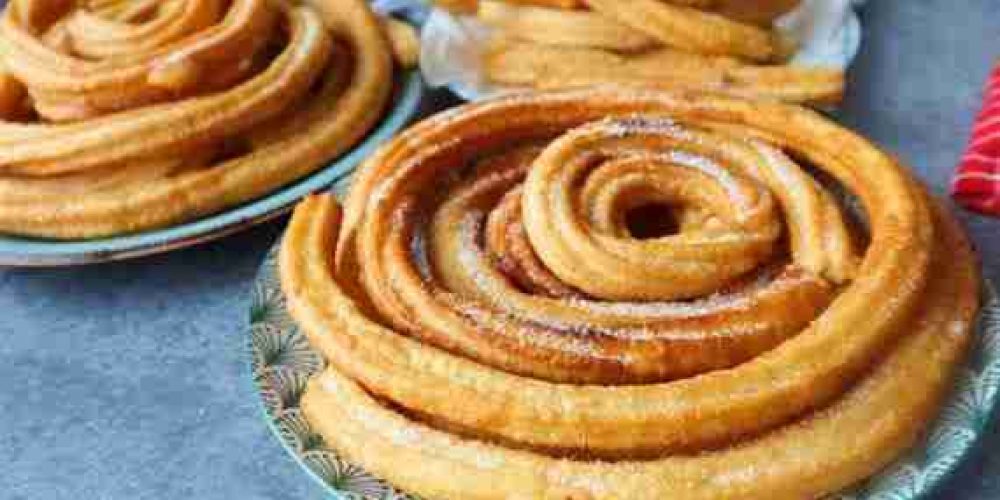 Irresistible ways that different cultures have found to fry up dough include the jelly-filled sufganiyot in Israel, and in China, a twisted dough stick known as you tiao.

Fritter, cruller, doughnut, beignet, elephant’s ear, funnel cake, buñuelo are also variations on deliciously deep fried dough but the one that is perhaps most famous is the churro.

Churros have now become one of the most popular food indulgences of any kind, including a version in Disneyland.

Whether they were first created a few centuries ago by shepherds who invented the churro out of a need to make some simple, filling food while roaming the mountains, or many centuries ago by Phoenician sailors, the word Churros has now become one of the highest-ranked recipe searches on Google.

Recipes for ways to serve up and enjoy fried dough date from the 12th century, from Moorish Spain and other Arabic sources dating back to the 8th and 9th centuries

Today’s churro is not that different from the recipe for a flour and water fritter in Apicius, a Roman cookbook dating from the 1st century AD and in the Mediterranean, the frying of dough is known to date from the Ancient Greeks , and before.

Spanish explorers in the 17thC took their fluted snacks, skinny, crispy treats called churros to the New World on their ships. From there, over the centuries, churros have become as much a part of breakfast in Mexico City and Buenos Aires as in Madrid and Malaga, often dunked into a cup of steaming hot chocolate. 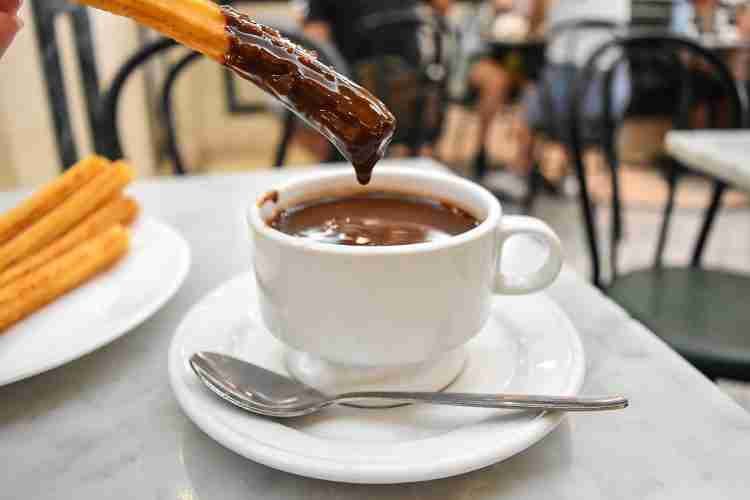 In wealthy 16th century Spain, chocolate, thick, dark and on the bitter side, was often drunk on its own but it was not until the late 19thC that it became a new sensation when churros were dipped into chocolate at Madrid’s famous Chocolatería San Ginés when they started serving churros and mugs of thick, dark chocolate.

As the now famous chocolateria explains “The churro is to dough what the French fry is to potatoes. Creamy, but with an emphasis on crunchy, in the right proportions.”

While authentic churros are an essential feature at ferias, fairs and events and celebrations throughout the year the traditional churrerias in Gibraltar and the Campo area are also still packed at breakfast time.

In Gibraltar several popular breakfast places, including Bake and Take, Little Trucker and Time Out, provide churros while in the Campo area one of the best known of the churrerias in La Linea is Katuca, where celebrations have started for their 30th anniversary.

“An authentic Spanish churro is thin and needs to be piped through a star-shaped funnel tip.

That way, the ridges get crispier then the rest, and the full gamut between crunch and chew can be appreciated by the mindful. The shape also has other things to recommend it.

A doughnut bumps into your cheeks but a churro is easier to eat, which may explain in part why they’re so popular as a walk-around treat at fairs and amusement parks.”

While one group of churro-enthusiasts enjoys their churros with chocolate, preferably chocolate Santa María, based on the chocolate enjoyed by the 17thC explorers, there is the camp that says churros should be enjoyed on their own, no chocolate. 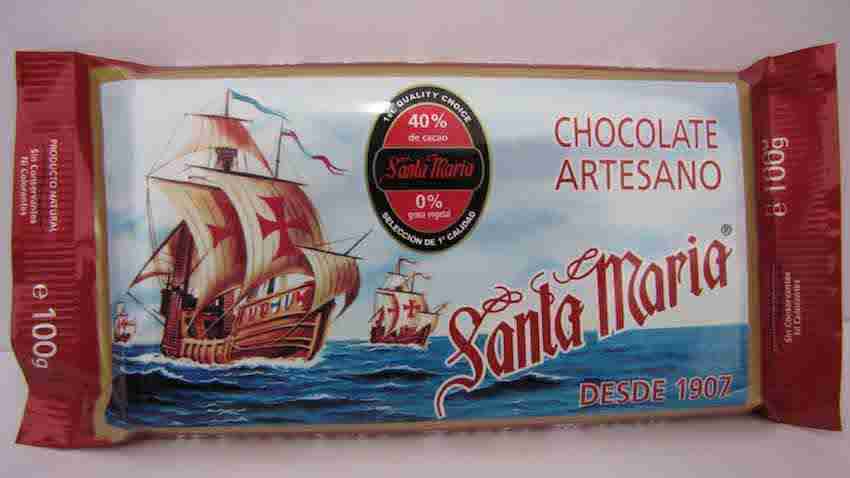 According to one churromaker, “Those aren’t churros anymore, that’s a dessert! I don’t like those silly frills, we make churros al natural, crunchy and served on the traditional metal tray.” 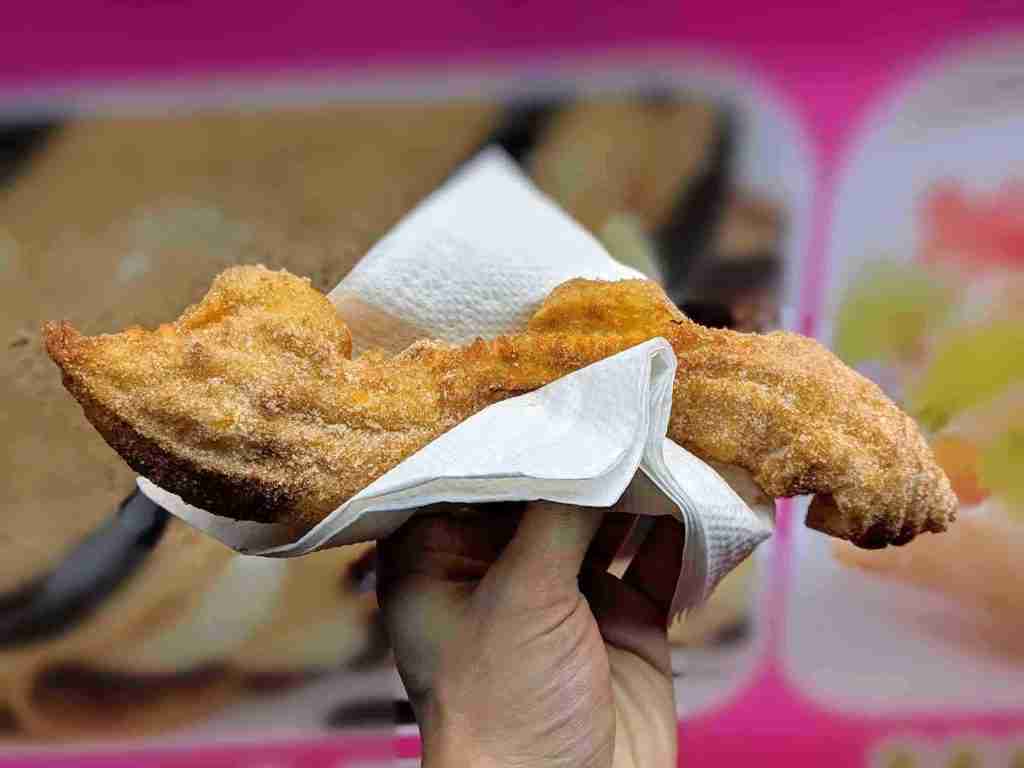 The porra is the plumper cousin of the churro, the difference between them only in that the recipe includes baking powder to create a puffed, airy texture, almost exactly the same as youtiao.

Two other authentic churro types, in addition to the classic, are the Madrid churro, creamy and crunchy, and in Malaga, the heartland of the churro, the terenjero, “softer and juicier, and very filling.” 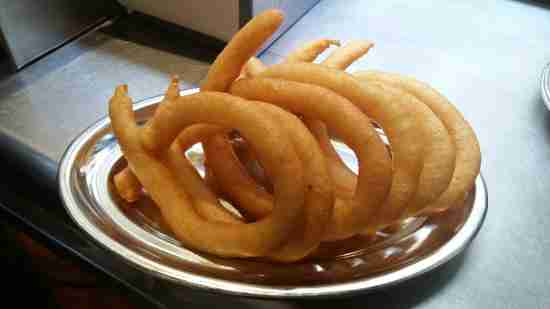 To make churros at home, the batter essentially consists of water, flour, eggs, sugar and a pinch of salt, piped through a pastry bag into long strips, deep-fried in vegetable oil, then rolled in sugar, sometimes mixed with cinnamon mixed into the sugar as a variation.

The basic mix for the traditional classic churro is one cup of water to one cup of common all-purpose flour, with a pinch of salt. The oil must be piping hot, so great care must be taken when handling it, and the flour dry so that the churros will absorb less oil.

Some recipes include vinegar, which makes a smoother batter or enrich their batters with margarine or butter and there are also cream- and custard-filled varieties.

When churros are eaten more as an occasional treat than a staple of daily eating, nutritionists and the health-conscious breakfaster need not worry too much about all the refined carbohydrates and calories.

Looking at the ingredients of churros it’s clear why the healthy eater should be cautious when they are eaten as a main part of the daily diet.

The nutritional content of the different types of churro depends on the variation in the recipe, but a 10-inch/25 cms, 2.5-ounce/75 gm plain churro would contain some 240 calories – about the same as a small helping of French fries, or a doughnut

The churro also contains about 9 of the 65 fat grams recommended on a 2,000-calorie-a-day diet. It has nearly 35 of the day’s recommended 300 grams of carbohydrates, which the body breaks down into sugar – and that’s before it’s been rolled in the sugar / cinnamon

Less than a gram of dietary fibre is available to slow down the breakdown of those carbohydrates, although the fat does slow the rate at which the stomach digests the churro.

The protein to help build muscle and tissues would be just the 3.9 grams from the flour and eggs.

Salt would be some 226 milligrams or about 10% of the recommended daily limit of 2,400 milligrams.

The flour, even if enriched, provides negligible amounts of calcium, iron and vitamins.

The fresh oil in which the churros are fried contains vitamin E or a preservative to keep it from turning rancid but as soon as the oil is heated it begins oxidizing, which is the chemical process of going rancid.

The oil changes chemically, picking up more hydrogen (thus the term hydrogenated oils) and forming trans-fatty acids, which are increasingly associated with heart disease and other chronic illnesses.

One real health concern is whether all the carbohydrates in the churros end up being transformed into excess body fat – that will depend on whether all the calories get burnt up by the average person neutralising the potential caloric damage of a single churro with a 2.5-mile run.

Adults should ensure they find the right level of tradeoff that’s always required between Eating and Exercise, although a visit to the gym is perhaps unlikely after enjoying the warm and fresh wheels of churros, chopped into manageable strips and served with sweet hot chocolate or coffee alongside.