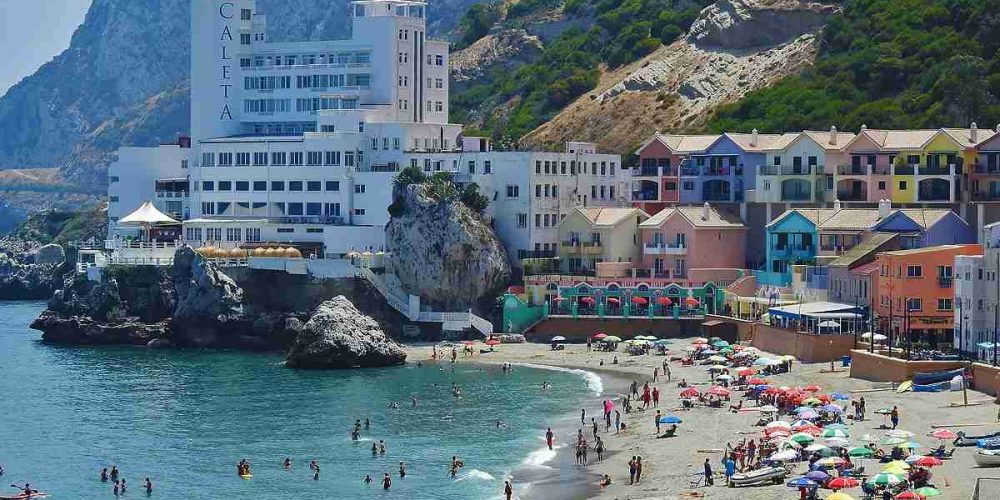 DISCOVER GIBRALTAR WITH GIBRALTAR.COM
Text And Photography Courtesy of www.gibraltar.com

Catalan Bay Beach is the middle beach between Eastern Beach and Sandy Bay Beach on the eastern side of the Rock lined by the Mediterranean Coast of Gibraltar. It is the second biggest sandy beach on the Rock.

Unlike the other beaches on this side of the Rock, Catalan Bay has an incredible history dating as far back as the 1600’s (in terms of written history.) It’s a very popular and extremely picturesque beach and village. Even just looking at the pictures, you can see it has a lot of life and colour, and if you are into fresh seafood, this is where you will want to dine.

Interesting fact:
There are a couple of theories as to how the village got its name. One theory shows documented evidence of a group of 350 Catalan servicemen that were believed to have settled here after having aided the Anglo-Dutch capture Gibraltar during the War of Spanish Succession in 1704; hence the Bay being named after these Catalan servicemen.

There are references though dating further back to 1634, calling the bay “La Caleta” – meaning small bay or cove. Either way, the beautiful Catalan Bay has long served as a fishing village for many centuries. During the 17th and 18th centuries, Catalan Bay was predominantly populated by Geonese fishermen. It’s interesting to know that Genoese was actually the spoken language in “La Caleta” well into the 19th century, however the early decades of the 20th century saw it finally die out.

Back in the 19th century, the Governor of Gibraltar only permitted fishermen and their families to live in Catalan Bay. They would require a fishing permit in order to do so, and only a very limited number of permits would be granted each year. It’s quite amazing to think, but the majority of families living in Catalan Bay today are direct descendants of these original Genoese fishermen, locally known as “Caleteños”.

Catalan Bay is also home to the Catholic Church of Our Lady of Sorrows. Each September there is a procession to the beach carrying a statue of “Our Lady of Sorrows”. During this main religious festival of the village, the Bishop of Gibraltar blesses the sea. It is a very lively and well attended festival enjoyed by many young and old.

Talking of such, in the distant past, Catalan Bay was relatively inaccessible from the main town of Gibraltar. Regular rock falls would often block the main route to the small fishing village. This forced autonomy though only proved to be a blessing in disguise, as today Catalan Bay is still preserved with a great deal of its original authentic charm.

The brightness, the colours, the smell of seafood, the smiles and festive appeal, honestly make you feel like you are in another world of its own. The sandy beach is nothing short of spectacular, and the choice of cuisine is to die for. It is easily accessible by bus, well maintained, and not for no reason probably the most popular beach of Gibraltar.